Skulltaker remains a bloodletter's bloodletter - to use the phrase that I evaluated him with last time. He's still the great guy in the Khorne Army that all the lesser daemons look up to. They still just want to be like him. 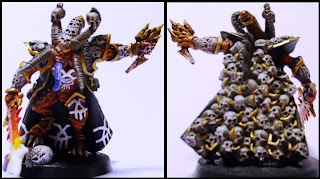 Skulltaker is now unique in the whole of the daemons codex for possessing Eternal Warrior.  Seriously: he's the only guy with it.  Why? Because of all those skulls on his cape.  Why every other skull adorned daemon doesn't gets this (let alone greater daemons) remains one of those eternal mysteries.

He has lost rending, but still has instant death.  He has AP3 on his sword, and a 3+ armour save.  All round, he looks like a solid choice to me.  But he does suffer a couple of issues.  Firstly, he is only toughness 4 and dies like a marine captain to be honest.  And he's movement is "standard" fare to say the least.  These two points can be improved in one fell swoop by paying an extra 45 points for a juggernaut of Khorne for him to ride on in to battle with.  This gives an additional +1W,T,A to Skulltaker and is well worth it in my opinion.  Hide him in a squad of skullcrushers and go forth.  He's ideal in a small (under 1500 ... even under 1000 points) battle.  In larger points battles, I'd be first considering bloodthirsters.  But in low points games, he still has the potential to be amazing if played right.
Posted by jabberjabber at 16:20