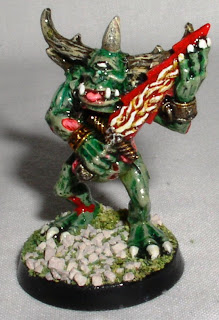 Unlike Epidemius, the Heralds of Nurgle have remained a reasonable option in the Chaos Daemons army.  Certainly their cheap base points cost make them appealing, and combined with their high customizability, I can certainly see that they're going to get used on the battlefield (me included!).

For the rewards available, I think the plague flail (lesser reward) is entertaining and tempting.  For a +1 S weapon that allows an extra wound from a T test (should an unsaved wound be caused in the first place), a few of these heralds could spell trouble for any multi-wound opponent (especially space marines).  The balesword (greater reward) doesn't do much for me though -- instant death is good, but its mixed in with an anti armour ability that means its points are probably wasted.  I can see some reason for it, but the plague flail feels better to me.  Most of the exalted rewards are probably not quite worth it on a herald, but I could see a portalglyph being employed on a deep striking unit.  The high T of the herald means that the herald stands a chance to set it up when he wants.

For the loci, the lesser one (2+ poison on a 6+ roll to hit) is somewhat appealing, but pales into insignificance against the feel no pain greater locus.  The exalted locus is okay (suffering an additional hit on a 6+ to hit), but the greater reward is still much more of a buff for the unit in my opinion.

For survivability, the palanquin ranks up there as a great way to take a herald up to four wounds.  But I find myself wondering if this is strictly needed.  Sure: 4 wounds at T5 (presumably with FNP) is awesome.  But can still be instant killed.  I think I'd somewhat prefer to have a cheaper herald hidden in a big mob (although yes: I realize that he could still be sniped).

And the psychic powers are strong here as well.  Biomancy inparticular is strong in combination with Nurgle.  Added to that is probably the best psychic power in the book: plague wind (at least in terms of pre-close combat assault!).  Plague wind (a large template poisoned attack) is also pretty good should it be rolled.  Hence overall, having a psyker herald is sorely tempting.

Here are a few builds to consider.

Herald of Nurgle, Greater Locus of Fecundity (70 points)
This should be everyone's baseline herald of Nurgle.  He grants his unit feel no pain - enough said.

Herald of Nurgle, Greater Locus of Fecundity, Plague Flail, Level 1 psyker (105 points)
The plague flail adds an extra dimension to the herald, whilst the psyker ability allows a strong assault orientated power to be selected from Nurgle's own domain.

Herald of Nurgle, Greater Locus of Fecundity, Level 2 psyker (120 points)
A more buffed up psyker who is relying on these abilities in place of a plague flail.  Probably much more effective to be honest.  But the price is getting up there as well.  This flavour is going to be seen frequently at higher points games.

Herald of Nurgle, Level 2 psyker (95 points)
Replacing the feel no pain for a little biomancy.  Not a bad exchange perhaps?

Herald of Nurgle, Greater Locus of Fecundity, Level 2 psyker, Palanquin of Nurgle (160 points)
An expensive distraction. Deep strike in the back lines and watch as the enemy tries to take it down.  Hope that they don't have S10 weapons.
Posted by jabberjabber at 15:37

The ether blade is a great upgrade for these guys

I agree with Adam. The Eitherblade is a real steal for 10 points.