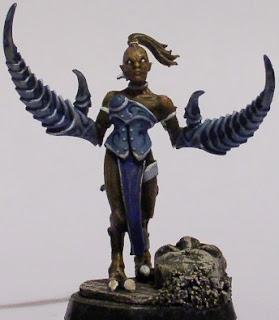 The Herald of Slaanesh is a neat choice, and has application in both mono-Slaaneshi forces and mixed forces.  I think these daemonettes have many interesting configurations and options.

Firstly, in terms of the rewards that they can choose, the Slaaneshi weapons in both lesser and greater rewards are tempting (S5 rending and 2d6 ranged assault weapons).  The etherblade is not bad either with AP2 (but we already have rending), so if we're doing that, then perhaps a greater etherblade would be superior.

In psychic abilities, the herald has access to the telepathy and Slaanesh's own discipline.  Telepathy is, of course, powerful, but it can be a bit of a gamble to get a good roll there.  So if we're doing psychic abilities, I'd be taking level 2.

The Locus abilities are similarly strong.  I'm particularly smitten with the exalted locus: re-rolling all to hit rolls and selecting who accepts a challenge in melee.  The greater locus (+5 I) is neat, but perhaps not as needed.  The lesser locus (move through cover) is okay.  But for me, the exalted locus is where it is at!

The herald can also select a steed of Slaanesh, chariot and exalted chariot.  The first is useful so that the herald can run with the other pleasure-seekers, whilst the chariots are a good way to top up the totaly number of chariots in the army should a mono-Slaanesh player be going down that particular route.

Here are a selection of builds to consider:

Herald of Slaanesh, Exalted Locus of Beguilement, Steed of Slaanesh, Level 2 Psyker (140 points)
To run with the seekers!  Consider a greater etherblade to taste.

Herald of Slaanesh, exalted seeker chariot, lash of despair, level 2 psyker (195 points)
A hugely expensive herald, but a way to have many more chariots inside the army.

I definitely would take AP2 over relying on rending hits, its just too random