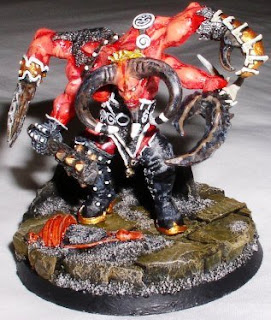 The Keeper of Secrets is the Slaaneshi Greater Daemon. In common with the Great Unclean One, it lacks wings and must make its way on foot to where it needs to be.  As such, it is a prime candidate to deep strike on to the gaming board to where it needs to be.  This is doubly true given the "average" stat line for most things except WS and I.  The Keeper is also the cheapest of the Greater Daemons.

Flavour-wise, I'm gratified to see that the Keeper of Secrets obtains preferred enemy against eldar and dark eldar.  And rightly so in my opinion as well. Those spirit stones are very tasty, the way I hear it.

Like the Great Unclean One, he (she? it?) is a level 1 psyker that is upgradable to higher levels with some additional points invested.  Given the access to telepathy, and Slaanesh's own "excess" discipline, this could be good in the long run.

And as with other greater daemons, they can choose up to 50 points worth of lesser, greater and exalted rewards.  I've slowly been warming up to the Grimoire of True Names and the Portalglyph recently, and I think both The Keeper of Secrets is a good choice for either (Great Unclean Ones for the Grimoire only, and Lords of Change and Bloodthirsters for both as well probably due to their movement).  With that in mind, here's a couple of builds.

Keeper of Secrets, Level 3 psyker, Portalglyph (250 points)
Deep strike in to the heart of the battle with support from your other troops.  Use the portalglyph immediately and start using those telepathy powers. Charge and using rending as soon as possible.

Keeper of Secrets, Grimoire of True Names (200 points)
Use the Grimoire as a buff for nearby allies (probably a fully decked out squad of seekers, or a squad of daemonettes with an attached herald) and have a bit of fun as a road bump before getting downed.