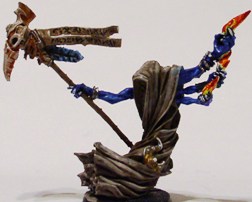 Alas, gone are the days of the Glamour of Tzeentch and controlling the opposition's firing solution.  In its place, we have a new HQ (instead of unit upgrade) that is able to and and all of its prime stats (WS, S, T, I, A) to that of an enemy it is in base contact with.

In addition, he comes with a lesser locus of transmogrification which means (on average) more blue horror tokens for squads of horrors when they perish in close combat.  Its not fantastic, but clearly suggests that he should be placed inside a pink horror unit to make the most of him.  And clearly, a pink  horror unit (a large pink horror unit at that) is probably a good way to "deliver" him in to base to base contact with an enemy.

He (she, it?) is also a level 1 psyker, selecting powers from Tzeentch's own change discipline.  This isn't much, but can provide a powerful shooting attack when required.  The major drawback of The Changeling (in common with most entries in the daemons codex) is the relatively poor saving throw.  Even with the mark of Tzeentch and being able to morph in to the stats of another creature, the best we can hope for is going to be a stalemate.  I can almost guarantee that anyone he is put up against is going to have a better saving throw.  Hence the Changeling has become a road bump.  An interesting one, to be sure.  But little more.  Take him as part of a mob of pink horrors and cause a little havoc engaging enemy characters and their "command squads".  But make sure there's some backup coming.
Posted by jabberjabber at 15:33