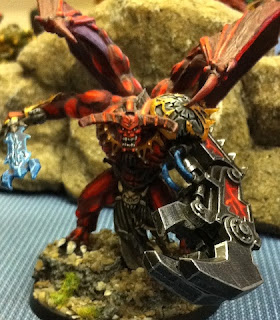 I like the daemon prince model (in plastic) very much, but am sad at the new points cost structure for it, both here and in the Chaos Space Marine codex.  Whilst I agree that it needed reining in, I think its a little bit too far. But enough of that.  The Chaos Daemons version of the Daemon Prince is actually remarkably similar to its Chaos Space Marine counterpart.  At least the comparability is good to see.

One of the things to realize with daemon princes is that they can take up a heavy support slot instead of an HQ slot.  This is done if a greater daemon of the appropriate power is taken.  Hence a bloodthirster can make a daemon prince of Khorne a heavy support option -- just like it was in the previous daemons codex.

So whilst there's better options for HQ options in the codex (for instance, the daemon prince can be instant death'ed by a vindicator shot), let's have a look at a few potential builds incase you're going down the heavy support route:

Daemon Prince of Khorne, daemonic flight (200 points)
I don't think the less, greater, or exalted upgrades are particularly worth it here.  Take him for what he is and go hunting most things in the game.  This could be part of a daemon-zilla tactic with bloodthirsters in the HQ slot(s).  Could make an interesting army option.

Daemon Prince of Slaanesh, daemonic flight, Witstealer Sword (205 points)
For a lesser reward, the witstealer sword allows a second wound to be inflicted and makes this daemon prince in to an HQ killer - particularly space marine equivalents.

Daemon Prince of Tzeentch, daemonic flight, Psyker level 3 (285 points)
The psychic monster strikes!  But don't bother with this realistically: take a Lord of Change instead and have done with it.  Either that, or just use it as a basic flying prince. The Tzeentch prince is really expensive to be honest.  And this is one of the reasons why (in comparison to greater daemons) that I feel daemon princes are over-costed.
Posted by jabberjabber at 15:01

Seems like the Prince of Slaanesh with the Whip would be a decent anti-flyer choice in the new book. 2d6 S6 shots hitting on a 2+ seem good.

Completely agreed! Thanks for point that out.