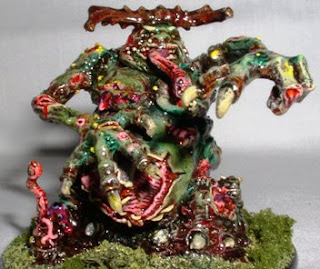 This guy is sticking around like Ku'Gath. That fact alone is almost enough of a reason to take him. See how the enemy shudders as they try to take him down.  Add in to this that the Great Unclean One has access to biomancy, and you can see certain builds that are going to make him even better.  The plague discipline of Nurgle is also attractive for its AP3 flamer primaris power.

The only (and rather serious) disadvantage is the lack of movement: slow and purposeful coupled with no wings means that like Ku'Gath, we're probably going to be choosing him for a deep strike in to the heart of the enemy.  And once there, he's hopefully going to both cause some damage and keep alive.

The lesser reward option zero is the plague flail.  Giving +1S, it can also cause additional wounds on a failed T test.  This clearly marks it out as an enemy character killer.  Should the great unclean one get in to combat, this piece of kit could be very useful indeed.

Here's a couple of build to consider:

Great Unclean One with plague flail (200 points)
A nice option for character killing ... assuming this guy can make it into close combat.

Great Unclean One, Plague Flail, Level 3 Psyker (250 points)
Possibly the best build, but a steep price tag attached.  Use in apocalypse.  Use with caution at lower points levels.
Posted by jabberjabber at 18:02