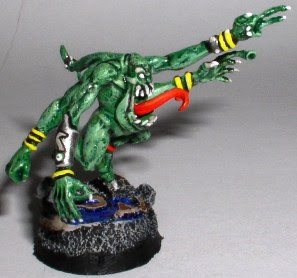 The herald of Tzeentch is highly configurable, much like all of the heralds.  But the thing that really appeals to me is the ability to configure them as a high level psyker for a low points level.  Importantly, the not only get access to Tzeentch's own Change discipline, but they also get access to Divination.  Much has already been made of how good divination can be, so I won't repeat that here.  But this is the prime reason that I can see to take and configure the herald for.

In terms of the available rewards, the staff of Tzeentch is a decent anti-character weapon, but why do we want horrors of Tzeentch in melee? The mutating warpblade is fun: I've always been fond of creating chaos spawn out of enemy characters.  But again, this version of the spawn maker needs to slay the characters in question.  Again: horror's aren't true close combat exponents.  But the appeal is there for me personally!  Out of the exalted rewards, the portalglyph seems appropriate.  Since the horrors and the herald are avoiding close combat for the main part, they seem like a reasonable choice to set up the portalglyph and watch the ensuing madness. The Grimoire of True Names has a certain appeal as well, but I'd soon that be taken by a tougher HQ choice to be honest.

Of the loci, the locus of transmogrification is clearly there to be used in conjunction with large numbers of horrors.  This could actually be a useful road-bump ultimately, but little more.  The greater locus of change will result in an improved S value more than half of the time - its just a pity that it doesn't stack with the lesser locus.  The exalted locus of conjuration gives +1S to psychic powers.  This is actually worth while to have (and not random!), if it weren't for the points cost.  You'd certainly want to run such a herald with horrors for maximum benefit, but I can see that a solo herald on a disc or chariot would also be cool.

Naturally, both the disc of Tzeentch and burning chariot option make the manoeuvrability of the herald much greater.  I still like the chariot option and it can be a good option.

Herald of Tzeentch, Level 3 psyker, burning chariot of Tzeentch, exalted locus of conjuration (170 points)
Drop the locus if the points cost is too high, but otherwise, this is quite a functional herald: able to zoom around the battle field taking pot shots at any and everything.

Herald of Tzeentch, Level 3 psyker (95 points)
Run with a batch of horrors.  A happy and cheap configuration that is worth it.

Herald of Tzeentch, Level 3 psyker, Portalglyph (125 points)
Set up the portal, and then go forth and out-psyk the opposition.

Herald of Tzeentch, lesser locus of transmogrification (55 points)
The road bump.  Implant within a huge horror squad and tie up a suitable enemy unit for a couple of turns until help arrives.
Posted by jabberjabber at 16:07

Is there a reason why you don't consider it worthwhile putting Heralds with other units (e.g. Screamers).

To go with some of the other units, we'd want the herald on a disk to keep up. I think this is a solid option! i.e. just a simple omission on my part from my (sub) sample of builds.
For a disk build to go with screamers and the like, I'd probably still want a good psyker and possibly a portalglyph. I think those options are strong.

I agree. I run 3x 8 Screamers with a Mastery 2 Disc Herald each and Prescience & Misfortune are brilliant on these hunting packs. I agree on the Portaglyph too :-)