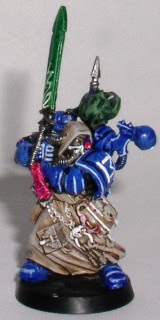 One of the cheapest options in the HQ section of the new Dark Angels codex is the librarian. I'm rather impressed with him, in the same was that I was with the Chaos Lord and Chaos Sorcerer.  And, unlike the chaplain, they all have the inner circle rule.  The only real drawback that I can see is that he can never be a level 3 psyker: that is reserved for Ezekiel only.

There are many options for the librarian: ranging from terminator armoured deep strike tactics with the death wing, through to drop podding down with a tactical squad, and wearing a jump pack to get with the assault squads.    I'm not too bothered about adding in extra guns or relics as the psyker should be using his psychic powers actively in their stead, but equally, I'm not completely adverse to it either, it just depends how expensive we want to get!  Let's have a look at a few set-ups for the librarian:

Librarian, level 2 psyker, jump pack, displacer field (140 points).
For an assault squad, this guy backs himself with his psychic powers and force weapon and uses the displacer field for protection.

Librarian, terminator armour, level 2 psyker, Foe Smiter (150 points).
Accompany the Death Guard in to battle, or alternatively, go solo and hunt down your targets more selectively or provide a back-line headache to the enemy.

Librarian, conversion field, Lion's Roar, infravisor (105 points).
Drop pod down with a tactical squad and fire the Lion's Roar for victory!  The infravisor is there for the turn 1 dropping in the event of night fighting.  Getting that early Roar shot off might be vital.  This build is kept deliberately at low points values for utility and savings on points that should be spent elsewhere.  This librarian will probably be playing second fiddle to Belial and is there really to make a scoring unit fearless so that it can claim a backfield objective.
Posted by jabberjabber at 15:11