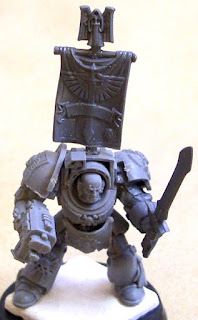 The Company Master is the first highly customizable HQ character that we come across in the codex.  Although he doesn't have as many permutations as the CSM Chaos Lord, the Company Master is still a formidable choice for the generic Dark Angels force.  By that, I mean if you're playing Death Wing, Raven Wing, Dual wing (i.e. combo-Death and Raven Wing), then you should be looking to Belial, Sammael or Azrael for the HQ choices: the company master will only be a second HQ choice for you ... and even then, I'd be tempted by a librarian ahead of a company master for the second choice.  Hence, my first observation is that Company Masters are for the blended Dark Angels player, or a utility secondary HQ choice to fit in with a certain number of points in Death Wing (etc.).

Given that observation, his secondary role may be to accompany a squad of terminators in an army lacking Belial to pack a bit of a better punch (but note that the rules prevent a company master from purchasing a bike as an upgrade! boo!).  For armies lacking Death Wing and Raven Wing (why?), he provides a means to have fearless on a unit.  And as such, he's probably cutting the unit out for close combat duties and should be constructed accordingly as he's going to be wasted behind an Aegis defence line manning a quad gun.  He's got to be up close and personal to be effective and in a support role.  Hence he's probably going to be teamed up with a solid command squad, or with a veterans squad.

Let's have a look at a few potential builds for a Company Master (and don't forget the company master comes with an iron halo for free when looking through these):

Company Master, Terminator Armour, Porta Rack, Mace of Redemption (170 points)
I rather like the idea of subverting your enemies teleport homers to your own cause.  This company master seeks to make it in to close combat and activate this ability with the porta-rack and (rack up) suitably quick kills with the mace of redemption.

Company Master, artificer armour, displacer field, thunder hammer (165 points)
The displacer field makes a welcome return here.  Make a 3+ invulnerable save and move (in potentially a useful direction!).  Saddle up with a thunder hammer and artificer armour and you have (effectively) a thunder hammer and storm shield terminator with a teleport move every turn.  Plus if he's locked in combat, he stays there and gets a free pile in move.  Team up with some veterans or command squad for some interesting times!  Add an auspex if you're not bothered by shooting with this guy.

Company Master, artificer armour, jump pack, conversion field, lightning claw, Foe Smiter (175 points)
He's there to go with a jump pack unit (assault squad for example): shoot with Foe Smiter (an excellent Master Crafter weapon -- assault 3 at 24" for goodness sake!).  Get within 1" with the jump pack before declaring a charge.  Use the conversion field to blind the squad that is going to be charged.  Take advantage with the lightning claw.  Points-wise, he's expensive.  But I like the feel of this one regardless of the price.

Company Master, infra-visor (95 points)
Cheap and cheerful.  This company master is to accompany a devastator squad behind an Aegis defence line -- he should be manning the quad gun since he has BS=5.  Otherwise, swap out the infra-visor for an auspex to reduce the cover save of a target for the other squad members.

Company Master, Shroud of Heroes, Terminator Armour, Lion's Roar, Displacer Field (225 points)
This guy is a lone wolf, not to be teamed up with anyone in order to make the best of the Shroud of Heroes.  He's got the Lion's Roar to shoot off and kill something like an opposing terminator squad, before making melee contact and finishing them off (or at least tarpitting them a little while).  To be fair, I wouldn't play this one outside of Apocalypse.  But I thought I'd post it for completeness' sake.