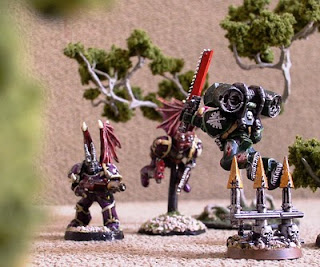 Although this squad is competing for the fast attack squad with many nice ravenwing options such as the attack squadron and the black knights (even more so if Azrael or Sammael are not present), they're pretty solid still.  Compared to regular marines, they have an extra attack instead of a bolter, and (obviously) a jump pack.  The jump pack can be sacrificed in favour of a rhino or drop pod, but when teamed up with things like the dark shroud, I'm not sure this is needed (unless we're building a rhino wall army, or a drop pod of doom list).

The options for the squad are reasonably attractive: double tap a special weapon (flamer or plasma pistol), various options on the squad sergeant (including the option to make him a veteran for one extra attack).

Here's a few potential builds that are worth thinking about.

Assault Squad, 2 plasma pistols, veteran sergeant with power weapon (140 points)
Plasma is fluffy in Dark Angels, remember?  This squad is really a sniping one followed by assault.  Probably run this near a darkshroud for added protection and sally forth.  Add melta bombs to taste.

Assault Squad, 8 members, 2 flamers, veteran sergeant with thunder hammer (186 points)
A more full squad for horde hunting and general assault goodness.  This is one that I'd be seriously contemplating.

Assault Squad, 10 members, Drop Pod instead of jump packs, 2 flamers, power fist on a veteran sergeant (215 points)
Drop pod of death lists only.  Cute, and combat squad-able means that not every member has to go in the drop pod.  Some can go in different directions to contest objectives.

Well, every member has to go into the drop pod, but they can go different directions.

I'm going to politely disagree with you mate!

Page 28 of the codex: "Note that two combat squads split from the same unit can embark on the same Transport vehicle, provided its Transport Capacity allows."

i.e. they CAN, but there is no MUST in the rules (probably to take care of razorbacks selected as transports amongst other things).

You split the squad at deployment, so you can't keep one half in the pod and put the other half on the table.

Hi: combat squads happens "immediately before" deployment, not during or at the start of deployment (codex page 28). So I think my argument holds?