The Icon of Wrath is for the Khorne Boys amongst us.  In short, the equipped unit can re-roll charge distances and gain furious charge.  Both are totally worthwhile on a close combat squad! 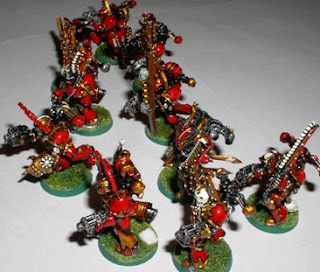 The average price for the icon is 20 points, but a little less for some squads, e.g.: Khorne Berzerkers. This is understandable since they already have furious charge.

So, some players may hesitate to purchase an Icon of Wrath for Berzerkers.  But you'll only do that once.  That'll be the time that you roll 3 or less for your charge range, but needed a 6 or so to get in to combat.  With Kharn in your unit as well.  After that, I assure you that you will want to take this icon!  (although it'd be even better if it still acted as a teleport homer, but thats another post!).
Posted by jabberjabber at 16:21

I wouldn't take Berserkers in the first place (assault unit with no mobility) but if I were to take them, yeah, I would take the icon. This is, like a lot of options, good on a Khorne terminator squad that is already a flexible unit so you have something to do whilst you amble up the field.

I prefer reg CSM kitted out as berserkers, but you can give them flamers and junk, for almost the same price.

That's absolutely why Berserkers are bad. CSM with Meltaguns? That don't require a Khorne lord to unlock? Sweet.

I wouldn't say they are bad, just situational.

The problem is they are an assault unit with no reliable transportation (crappy land raider), and no duality. Terminators have the same crappy transport, but have duality, and have the robustness to slog down the field. Terminators do the punch-your-face-in assault unit better, and khorne CSM do the torrent-assault-for-cheap better, having meltaguns/plasmaguns for duality. CSM has SO many better assault units, it's sad. Bikers, spawn, and Multilators only add to this.