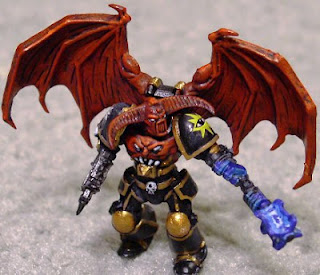 The CSM codex allows the chaos general to roll on a new table for warlord traits, or have the option of rolling on the standard table contained within the 6th ed. rulebook. Which is worthwhile? Let's have a look at the possible outcomes.

1. Black Crusader. Preferred enemy to space marines is a potent cocktail when mixed with Veterans of the Long War. The is doubly so if the (local) meta-game is space marine heavy. Afterall, this is what chaos space marines are there for.  Hence I think this is a useful roll if you're likely to be playing against space marines (or their variants).

2. Flames of Spite.  The Soul Blaze rule for the warlord and his unit seems kind of cool on the surface.  But scratch down a little bit, and soul blaze isn't too "hot".  Take a look at my earlier evaluation of the Icon of Flame for some insight.  An extra bolter shot is neat, but its not a game changer.

3. Master of Deception.  Having infiltrate on up to three units is certainly a good outcome.  The havoc that can potentially be caused from this makes Master of Deception an excellent outcome.  Infact, its so good, that chaos commanders I know are seriously looking at building lists around Huron and Ahriman to guarentee that this is the warlord trait they're going to get!

4. Hatred Incarnate.  Granting hatred to the warlord and his unit is useful in many situations.  But this is a waste if they're facing space marines thanks to Veterans of the Long War.

5. Lord of Terror.  Because there are so many fearless and "They Shall Know No Fear" units out there, this one is not so great.  Poor Typhus gets this one automatically.

6. Exalted Champion. And finally, the most interesting ability is to re-roll rolls on the Chaos Boon table without having to resort to a Dark Apostle.  A nifty ability for the chaos lord kitted out for melee, not so cool for long-range warlords (e.g., Ahriman).

Preferred enemy works with shooting too doesn't it? Could be very nice, especially in plasma-heavy lists.

Agree with your assessments; #3 is the best by far, and I'm one of those toying with lists built around Huron. For lists where I have to roll, I'll probably go for one of the book charts.

Boons, and thus Exalted Champion, work when the Warlord kills something from ranged as well. This makes the Burning Brand more interesting, though many of the boons aren't useful from a distance. But on a Lord with a Brand, who intends to shoot a couple times on his way to getting stuck in, Exalted Champion seems a pretty good result. The same may be true for some Sorcs, depending on kit and powers.

Eh, the CSM traits are pretty meh. There are some good ones, but like you said, most of them are mediocre at best. I generally take Command Traits for my warlord, but I do roll on the Strategic Traits if the army has a lot of reserves. Personal Trairs are too situational in my opinion; they're all over the place on what they make your character better at, and few armies have a character built for every conceivable occasion.

I do personally have a few lists built around Huron. Combined with a character on a steed of slaanesh, it's pretty awesome.