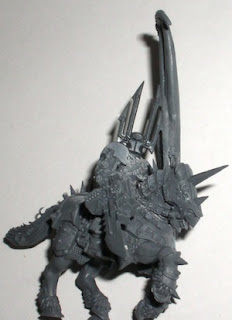 Having gone through all of the units in the Review of CSM in 6th, I now want to turn to a few of the options available to them.  The first one: daemonic steeds.

My only negative comment is that there isn't an "undivided" option. I'm pretty disappointed about this - I really rather liked the concept of daemonic horsemen lords!  Indeed, the general lack of "obvious" undivided chaos in the new codex is an all-round downer.  I guess that the "undivided" mark is now the lack of a different mark, rather than something specific as it used to be.

Those chaos lords with the mark of a specific chaos god have access to the Juggernaut of Khorne, the Disc of Tzeentch, the Palanquin of Nurgle or Steed of Slaanesh.

The Juggernaut gives +1 T, W, A and grants the cavalry rule to the chaos lord.  For the points cost, the extra wound and point of toughness goes a long way.  And of course, the extra attack is positively Khorne-orientated.  I'm impressed by the cavalry rule as well, especially considering that the bloodcrushers of the daemons codex are infantry.  One potential chaos lord build to take advantage of the steed is the following:
Chaos Lord, Mark of Khorne, Juggernaut of Khorne, Axe of Blind Fury, Sigil of Corruption, Veterans of the Long War (175 points).

The Disc of Tzeentch gives the sorcerer or lord a jetbike and an extra attack. I'm unconvinced that the points are quite worth it over a chaos bike, but I can certainly see how a unique build could be made out of it (see: Chaos Sorcerer for examples).  But a reasonably plain disc-riding Tzeentch Sorcerer seems about optimal for the points.  Consider this one:
Chaos Sorcerer, Level 3 Psyker, Mark of Tzeentch, Disc of Tzeentch, Sigil of Corruption (180 points).

The Palanquin of Nurgle grants a remarkable extra 2 wounds, 1 more attack, and the model becomes very bulky.  That's not a bad exchange rate, but it is pricey for low points cost games.  And what do we need 2 extra wounds for?  Sticking around, obviously.  If only I could outflank or deepstrike the lord on the palanquin, I'd be happy.  But hey.  Perhaps stick him in a large blob of cultists, behind an Aegis Defence Line, and hang tight on an objective!  Example:
Chaos Lord, Mark of Nurgle, Palanquin of Nurgle, Sigil of Corruption, Ichor Blood (150 points).

The Steed of Slaanesh should be swift, but it only adds 3'' to run moves and only 1 extra attack.  Nonetheless, it is cavalry, and gets the acute senses and outflank rule (horrah!).  How do we take advantage of these?  Well, the build has to be something swift, targeted (pick the target and charge!), deadly and works well with outflank.  Something like this:
Chaos Lord, Mark of Slaanesh, Steed of Slaanesh, plasma pistol, the Murder Sword, Sigil of Corruption, Veterans of the Long War (180 points).
Posted by jabberjabber at 15:01

Steed of Slaanesh build: Chaos Lord w. Mark of Slaanesh, Burning Brand of Skalathrax, other gear to taste. Bring him on from outflank with Warptalons or another unit of dudes that would be awesome if they could get Fearless and quick access to bringing the pain. Pair him up with Huron and have yourself an Outflank party and piss some people the hell off.

I am also disapointed in the lack of undivided support. This is most clear in the selection of daemon princes, where you MUST choose a patron god. What kind of crap is that? This also makes building themed armies rather difficult, because you really have no options to represent Word Bearers, Iron Warriors, or just good old undivided, renegade marines.

Word Bearers can use everything from the new codex. and Still fit the fluff. for instance, ill be using typhus to represent marduk. they arnt zombies, they are just cultists worked up onto a fearless frenzy. etc.

They still have the mark of Nurgle however, and it's quite a stretch to say that fanatical cultists are every inch as durable as zombies, particularly as you can literally have Fearless Cultists already. Where exactly do you go from there?

They canuse everything from the new codex, but they have nothing to call their own. They can take anything they like, but other armies can take that and then some; that's whay I'm getting at.

They dont have mark of nurgle when you take them as zombies.

You know what I mean; they've got Nurgle rules. They're nurgle units, not undivided units.

There are a bunch of daemons in the book that don't have to take marks though, from oblits and mutilators, to warptalons and possessed. Now I wouldn't necessarily take talons with word bearers, but numerically appropriate circles of CSM and cultists, plus possessed, oblits, and maybe some allies from the daemons book can easily give you a word bearers list.

They don't have to take marks, no, and feel free to take them. It's not that you can't play Word Bearers; it's that there are no Word Bearers rules; your Word Bearers army is just a vanilla Chaos army with a different paint job. Word Bearers shouldn't have the same rules as, say Iron Warriors, but here we are.