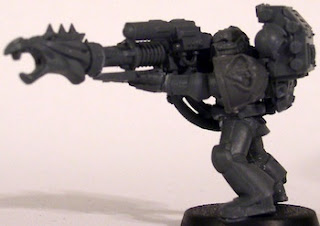 In all the codexes out there, chaos havocs are the only ones to so far be given access to Flakk missiles. Of course, this will change over time, but for the moment it is potentially one advantage that havocs have. But they're not cheap. Coming in at 25 points each, they are an expensive upgrade. Chaos havocs can have any four of their members take special or heavy weapons (including flakk shooting missile launchers; lascannons; plasmaguns; meltaguns; autocannons; heavy bolters; and flamers). With some of the special weapons, the havocs are clearly competing with chaos chosen for a slot and duplicating what they can achieve on the battlefield. That said, they are a few points cheaper than chosen and do occupy a different FOC slot. But as with the Elites slot, there may be superior options elsewhere in the heavy support slot that one would like to investigate prior to selecting havocs.

As with chosen and other basic marines entries in the codex, they get access to the full gamut of marks, icons, aspiring champion regular upgrades and can also take a chaos rhino if they wish.  In concert with a quad-gun they should also make mince out of many units in the game if set up correctly.  So, with that, let's take a look at a few builds.

5 Havocs; 4 with missile launchers plus Flakk; 1 Bastion with Quad-gun (300 points)
Pricey, but it can beat down flyers with regularity.  4 flakk missile plus the aspiring champion operating the quad gun makes for an expensive way to down aircraft and monstrous flying creatures.  But this could be an option for those playing flavourful lists.  Swap out the missile launchers for autocannons to taste.

5 Havocs, 4 plasmaguns, Mark of Nurgle, rhino with havoc launcher (197 points)
Team up with Huron and infiltrate these guys to the back line for some plasma-tastic fun.  Rapid firing 4 plasmaguns if you've never done it before is quite an experience.  The havoc launcher is there to ensure at least some heat is taken by the transport itself and the mark of nurgle means that they're going to be slightly hardier than some alternatives.

9 Havocs, Mark of Khorne, Icon of Wrath, Veterans of the Long War, 8 close combat weapons, 2 flamers, 2 meltaguns, champion with melta bombs and power weapon, Rhino Transport with Havoc Launcher (287 points)
Strictly cheaper than the chosen alternative but with less attacks, this squad can still pack a mean punch when run with someone like Kharn to lead them.  The mix of special weapons allows them to be deadly to both vehicles and hordes.  Angron would approve of the hate.
Alternatively, seek Fulgrim's praise by swapping to a Mark of Slaanesh plus Icon of Excess.  Equally brilliant in the right circumstances!

5 Havocs, Mark of Tzeench, Icon of Flame, 4 Heavy Bolters, Bastion with Quad-Gun (265 points)
Got a horde to deal with?  Then this is the setup that could be useful!  The heavy bolters lay down a withering, soul blazing fire combined with the quadgun that the champion is operating.  Meanwhile the bastion ensures that the squad has every type of save possible for these guys.  Team up with a chaos sorcerer for a good vantage point and fire at will.

10 Havocs, Mark of Tzeentch, 4 Missile Launchers (2 with Flakk), Skyshield Landing Pad (315 points)
With a potential 3+ invulnerable save and the ability to deep strike allies on the pad without scattering, this one screams "threat" for any army that relies on deep striking shooters.  Hello soul grinder allies?
5 Havocs, 2 meltaguns, chaos rhino with combi-melta (142 points)
A pure distraction unit meant as a sacrifice that if run with others of its ilk can likely pull off some serious meltagunning of enemy fortifications and tanks.  Risky, but cheap-ish.

5 Havocs, 4 autocannons, Aegis Defence Line with comms relay (185 points) Ensure your reserves arrive by taking the aegis defence line with a comms relay whilst suppressing enemies with your long range autocannon shots.  Sure, these guys will die quickly to infiltrating, outflanking, flying, and otherwise sneaky foes, but once turn 2 has hit, they've done their job, right?!
Posted by jabberjabber at 16:59

I would always advise taking VotLW on these guys. You are going to attract a lot of fire if you're doing back-field duty (4 autocannons), and that extra pip of Ld for a mere 5 points is awesome, and can certainly save your ass. Unfortunately fearless is 25 points, so it's only a good cost on 10-man squads.

I really like to bump up a Flakk squad beyond 5, and if possible give them a rhino to deploy in front of them and block (or deploy them in if you can't find a good spot in your deployment zone). It adds to the price, but for the utility that skyfire provides you want to protect your investment.

I'm really doubting that Flakk is that good of an investment. It's good against flyers, yeah, but it's just as good as its points allow. In other words, it does as much damage as you would expect to a flyer for a 25 point price tag. An autocannon is 10 points, and does proportionally that much damage. The problem is, that against anything BUT flyers, autocanons and missile launchers are about equal in power, so the 25 point price tag is far too much. If it had been 10 base for a missile, and 5 more for Flakk, then I would consider it. But I am not paying 25 points for something that is only a good price-to-power investment against flyers. I don't know about your experience, but players I face only have 1 flyer, if that, because most people like to build/paint tanks and guys far more than planes, and flyers are WAY freaking expensive (money-wise). They also tend to have a sense of fair-play, and flyers are, frankly, over-powered when taken in numbers of 2-4. Personally I think introducing flyers was a dumb move on GW's part; 40k is supposed to represent a skirmish game, honestly. Apocalypse is the place for things like flyers, titans, orbital strikes, daemon lords, etc. 100-man engagements is far too small, realistically, for any force to deem the use of a plane/jet/flying monster to be economical.