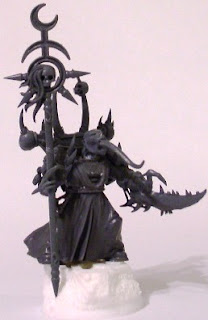 Late in 5th edition, there were a number of players who espoused the view that feel no pain had become too wide-spread in many armies.  To me, feel no pain means just that.  The narrative reason behind this had been one of two things: either the human(oid) body in question really wasn't wired for pain, whether due to degenerate disease (Nurgle!) or something similar; or the creature had taken certain chemical concoctions / drugs / psychic weirdness to bypass their pain receptors (Dark Eldar!).  And then necrons were just robots, but they have other rules.  But we'll ignore that!

So, upon reading the new chaos codex, it was a surprise and a narrative fit that I saw the Icon of Excess.  For the Slaaneshi devotees, they now have the option to also feel no pain.  The narrative reason falls under the second concept from above: a bit too much inhalation of "cloying musk" that drives them to seek fresh sensations regardless of the current state of their being.

The price is reasonably high for most units though.  I therefore think that we wouldn't want to be paying more than about 5 pts per marine for this icon for it to be truly effective.  Hence a slightly larger squad than minimal seems ideal for taking this icon, at least 6 (for fluffy reasons) and certainly a full squad of 10.

Additionally, I think the icon should certainly be deployed for front line marines (melee).  But for rear line marines, I have mixed feelings.  I can see how it would be of benefit for sonic weapon squads, or havoc squads, to grant them a little added durability and protection from incoming ballistics.  But the price kind of puts me off.  So I'll be sticking with front line units to use this icon with.
Posted by jabberjabber at 14:42

That's exactly what I was thinking. I have been giving Havocs the Mark of Nurgle and my "in your face" marines Slaanesh and the icon of excess. I've been putting more than 10 models in the unit.

According to the rules one model can be given the icon and so I have been giving it to the Aspiring Champion. It puts a lot of eggs in one basket but I'd rather have it be a basket with "look out sir" than one who is going to die from a precision shot without a chance.

I tend to not take this icon, as it is really expensive. It's not a rule which will always come into play per points invested, and seeing as how you can only take one icon, I have to give the nod to Vengeance ahead of this one. I could see taking this on a backfield unit of marines with VotLW.

Regarding sergeants with the icon, I personally dilike this, as you MUST issue and accept challenges, and while aspiring champs are equal to if not better than marine sergeants, characters will gladly accept your dumb-assed champ's challenge in order to knock off the squad's icon. Though again, it wouldn't seem a terrible idea on a backfield unit.