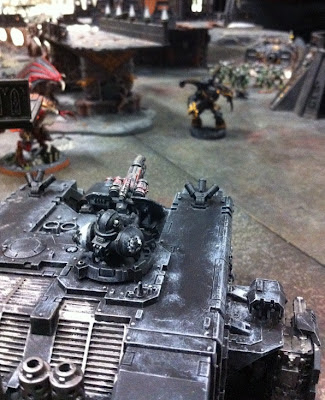 Its AV=14 all round.  It transports everything (even chaos spawn) and they can assault the turn they disembark.  It has a twin linked heavy bolter and two twin linked las cannons.  It can be heavy support or a dedicated transport for chaos terminators.  Its a land raider!

The points cost got 10 points more expensive than the last edition, but its still cheaper than the Imperial standard land raider.  And with justification too: it lacks the power of the machine spirit.  Even a corrupted machine spirit, sadly. But hey, the two twin-linked lascannons are sufficient to overwatch regularly: they even pose a threat to flyers if we do the maths.

That said, the land raider also gains access to the chaos vehicle upgrades.  So lets take a look at a few potential builds.

Land Raider, dirge caster, dozer blade, combimelta (250 points)
I think this will be a variant that will see a lot of play.  The dirge caster is there to help when the contents of the land raider get out of the assault ramp and charge.  The dozer blade is there to help with terrain.  The combimelta has two functions: threat, and to also lessen the chance of one of the twin-linked lascannons getting blown off.

Land Raider, Extra Armour, Daemonic Possession, Destroyer Blades, Combi Plasma (280 points)
The survivor.  Roll forward with impunity.  Tank shock enemies off objectives and destroy them with the aptly named destroyer blades.  Use the combi-plasma once, and then hope it gets destroyed instead of a twin-linked lascannon.  You could even risk having troops transported inside this one (assuming the possessing daemon isn't hungry for a mid-morning snack?).  These troops will then disembark to claim the objective off the unit that the destroyer blades hit.

Land Raider (230 points).
Make your imperial cousins jealous with the low points cost.  But don't tell them anything else about how it compares to their codex!!! (they'll laugh).  But seriously, this beast is still a land raider with AV=14.  Its a threat whatever way you look at it.
Posted by jabberjabber at 18:25

I wouldn't leave home without my Landraider with Dirgecaster and eight Khorne Possessed passengers!

Ehhhh.... Chaos Land Raider, you are disappoint. I am amazed that GW has still failed to grasp that PotMS is retardedly good, and indeed what makes the Phobos pattern any sort of viable. Without PotMS, you can't possibly use all of the basic LR's guns at the same time, and when you cost 230 pts. you NEED to be making a difference.

Worse (if you can believe that) is the fact that Chaos still doesnt' have a LR variant with frag launchers. Seriously? We have awesome terminators, mutilators, possessed, and more that can ride in a LR, and we can't get them assault grenades to they can have a chance against units in cover? For shame, GW.