Don't be too quick to dismiss these entities.  They may be warped beyond recognition by the fickle nature of the warp powers, but that doesn't mean they're cute puppy kitty dog cats either.  Against space marines, they'll be hitting on 4+ and wounding on 3+. 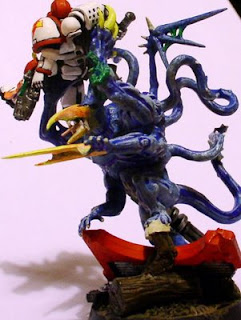 The mutated beyond reason rule is entertaining, in an analogous way to possessed powers, but a little bit weaker perhaps.  They essentially get a one in three chance of a reasonable armour save (they have none otherwise), rolling 2d6 and picking the highest for their attacks (this is actually remarkably powerful) and gaining poisoned attacks (okay, so they're not going to attempt to take on T=8 targets, but re-rolling the "to wound" roll against marines, eldar, gaunts, orks, etc., is a real plus).

They get rage and fearless in-built for the points cost (and fear, meh!) but are very bulky (only 3 per land raider! gah!).  Given the rage rule, the mark of Khorne for these guys is cheap, but not highly warranted.

The mark of Tzeentch will at least give the spawn a regular invulnerable saving throw, even if it is 6+.  So that represents a better investment.

The mark of Slaanesh brings the spawn's initiative up to the same level as a space marine, so at least they're striking at the same time.  But that's not too brilliant.

I think the mark of Nurgle has it here.  Having T=6 means that the chaos spawn will not suffer instant death at the hands of a well placed battle cannon shell and takes the "to wound" roll of ordinary bolter shells to 6+.

5 Chaos Spawn, Mark of Nurgle (180 points)
Take with a quick chaos lord (i.e. on a bike!) and charge forward.  Use the spawn to screen any incoming shots against the lord.

3 Chaos Spawn, Mark of Tzeentch, Chaos Landraider (332 points)
What could be more improbable than a small squad of chaos spawn jumping out of a land raider? (Just write down on a piece of paper that they're loaded inside - so that you can show your opponent - whilst you deep-strike the terminators elsewhere -- a nasty distraction!).  Swap out the mark of Tzeentch for the mark of Slaanesh for a slightly cheaper variant.  Hope that you get a full 18 attacks after disembarking.  Don't forget rage!

1 Chaos Spawn (30 points)
Urm, you got 30 points left over, right?  And you're not expecting to get any champion turned in to a chaos spawn.  Soooooo .... use those points and play the chaos you've always wanted to.  Run as fast as your tendrils / legs / hooves / arms can carry you to contest an objective somewhere.  Try not to die too quickly to bolter / gauss / shuriken fire -- stick to cover.  Alternatively, use as a fire magnet to lure a more inexperienced player in to shooting at it instead of something else.

That's about all I've got.  Given the Chaos Boon Table, I think we're going to be investing in the odd chaos spawn or two anyhow, so any additional ideas on what to do with them are welcome!

I like my Chaos armies Chaos flavored, so I like running spawn, even the nearly useless ones of the 5th edition. Glad to hear they got a little upgrade and can be even more fun than before!

How about 5 Spawn with no mark paired with a Khorne Lord on a Juggernaut, or maybe marked Slaanesh and a Lord on a Steed. The biker Lord can't really turbo boost and causes the Spawn to lose their re-rolls to charge from Fleet, but on a Juggernaut or Steed the Lord becomes cavalry and thus moves at the same pace. With the Slaanesh Lord you'd even have a sacred number, though I think the Khorne Lord with an Axe of Blind Fury is beastly.

I'm using 5 MoN Spawn to meat-shield a Mauler kitted Tendrils. They all move FAST! If I can get them all in to CC with the same unit on turn 1-2, loooooook ooooouuuut!

AH YES, I forgot about the other 6th ed bonuses. As beasts they now move 12" and then charge 2d6, so they can cross the board quickly. Are they still mindless with random movement or forced to move toward the closest enemy (as Rage used to be)? Damn, these guys can quickly overwhelm and tie up some stuff!

I always tell my opponent which units are in which vehicles, it feels more sporting (plus keeps me honest)

Agree with Green Stuff and J.D; everyone forgets to metion how fast these guys are! They went from S%P lumps of crap to essentially DPS machines. They cover ground and ignore terrain when charging, so they are your cheap, incredibly efficient melee units to back-up your heavier units, like terminators. And Fearless keeps them in the fight, the lack of which is one of my HUGE gripes with Warp Talons, which I'm sure we'll get to later.

So many great points in there guys: awesome! :)

Spawns Cant ride in Land Raiders - read something about transports ;).

@Typhus: Can you be specific please: what rule(s) prevent chaos spawn riding in transports? Sure, they're very bulky, but I can't find any rule preventing them having a ride. Maybe I'm mistaken? Let me know.