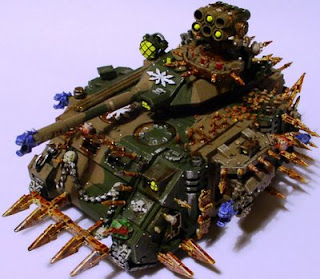 The final entry in the codex proper (I may review some further units from Forge World later) is the chaos predator.  Much like the Imperial version, it can be constructed with autocannon or twin-linked las-cannon as the primary turret weapon, with the usual sponson options.  In addition, it also gets access to the chaos vehicle equipment list for extra load-outs.

The predator needs a role realistically.  The triple-lascannon set-up (the annihilator) will be popular to take down opposing vehicles and monsters, whereas the autocannon (the destructor) and heavy bolter option is much better suited to anti-horde duty.  The cross-over variants are rarer. I regard only the lascannon sponson one as viable since the other variant tries to do two jobs at once and never gets much bang for its buck; whilst I've not seen the mono-turret version played anywhere in a long long while.  Still, the points cost is very comparable to havocs.  i.e. if you want 3 lascannons amongst those havocs, you're paying about the same points cost as for the predator.  So you've got to make the choice: is a vehicle better than infantry?  Maybe and maybe not, depending on circumstance, set-up and opponents.

Here's a few potential builds that are worth consideration.

Chaos Predator, Autocannon, Heavy Bolter sponsons (95 points)
Cheap and great at pumping out plenty of shots every turn.  The classic "dakka pred" is still a cheap cost option to threaten squads of infantry and hordes, whilst having a reasonable reach and also able to threaten light transport style tanks.

Chaos Predator, Autocannon, Heavy Bolter sponsons, Havoc Launcher, Warpflame Gargoyles (112 points)
Something that the Imperials still can't do: add a havoc launcher.  A twin-linked S5 small blast with a 48" range is awesome.  Especially when equipped on every tank you run!  Coupled with the new warpflame gargoyles option, this enhanced dakka pred is one of my favourite builds to take down large gaunt units when you need to, and also put enough hits on marines and terminators to take a few down.

Chaos Predator, Autocannon, Lascannon sponsons (115 points)
This is the one to take down monstrous creatures and provides anti-tank capability to boot.  It also has a reasonable price tag.

Chaos Predator, Twin-Linked Lascannon, Lascannon sponsons (140 points)
The tank-buster.  And can put hurt on greater daemons, big tyranids and other monsters to boot.  It can even take on flyers with a reasonable probability.  But I personally don't play this variant.  I prefer alternate ways of taking down tanks, so please take this entry as a suggestion for apocalypse only.

Chaos Predator, Twin-Linked Lascannon, Combi-Melta, Dozer Blade, Extra Armour, Destroyer Blades (140 points)
Strange.  Yes.  Here's the idea.  Its a tank hunter that once its done its job goes for a tank shock with the destroyer blades.  Okay - don't take this one too seriously: its too expensive to be perfectly honest.  Perhaps take a rhino with a combi-melta and destroyer blades if you're semi-interested instead.  I simply include it as a concept.
Posted by jabberjabber at 16:00

I find that the heavy bolter, havok, warpfire set-up is very effective. The amount of anti-infantry dakka you can throw is just embarassing. Its' very cheap for the amount of annoyance it brings; I've yet to have a game where this model didn't earn its points back. This is so good that it manages to hold its own when compared to autocannon havocs and forgefiends, and that is a serious achievement.

The one build I was thinking about running was something you didn't include: TL lascannon turret and heavy bolter sponsons. The combination of a pretty sure S9 hit with 6 anti-infantry shots seems useful to me for an all-comers list.

Also, would you ever run chaos tanks with daemonic possession? BS3 isn't that appealing to me, but ignoring most shaken and stunned seems useful.

I would never run the Las/Bolter set-up, because you can never fire it at full capacity. Hordes don't care about your 1 lascannon shot, tanks dont' care about your heavy botler shots. The only reason that set up (sort of) works on a Phobos is because of PotMS. All-rounder units only work when they have guns that are good against a vareity of targets; lascannons and heavy bolters are both guns that are good only against a specific target.

I would never take Possession. Now that Glancing hits don't cause results, you don't need nearly as much protection against them.