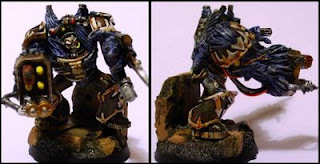 Obliterators have long been held by chaos player to be excellent choices for a heavy support option. This is not without reason and those reasons persist in the new codex, but there's also a few caveats to think about as well now.

Their strengths are obvious: the ability to manifest whatever energy based weapon (twin-linked variety at short range as well) is awesome.  In the new codex, they get the assault cannon added to their list of weapons.  This is yet another excellent outcome for chaos!  (on the flip side, in days of yore, they used to also have access to heavy bolters and frag missiles ... but the access to the plama cannon makes up for this I think!).  On the downside, they now must "rotate" which weapon they choose: we cannot select the same weapon twice in two consecutive shooting phases.  But there are always going to be plentiful targets, so this rule is not a bother!  Additionally, all the obliterators in a unit must fire the same weapon - not such a biggie, but worth mentioning.

They have the daemon rule (so thier 5+ invulnerable save stays intact), they're bulky (which means that they could be transported in a land raider should you want to) and they can deepstrike potentially (useful on occasion). The powerfist means that their close combat effectiveness is also reasonable, but with the caveat that they'll be striking at I=1.  Slow and purposeful is there as well, but that's not a biggie either since in terms of playstyle, I think many chaos players will situate them in some ruins / buildings with a good line of sight in their deployment zone for most of the game.  Deepstriking is okay and valuable as a decoy: but these boys are pricey and can die from instant death.  But given that they're essentially terminators with 2 wounds each, its often worth the risk to cause a little mayhem against the right army.

The upgrades available are minimal: extra obliterators, marks, and veterans of the long war.  So let's have a think about each in turn.

The extra obliterators can take your unit up to three strong.  Unless you're 100% relying on obliterators (and these days, you might not since they don't possess skyfire), going for three in each squad seems a little high.  I prefer to run mine in squads of 2, or go solo.  I use the latter when I don't have other slots in heavy support that I'm filling with other stuff (havocs, vindicators, etc.) as that means I can then have 2 obliterators in 2 different squads.  This has advantages: choose different targets and different weapons every turn for each obliterator and see what one of them does before activating the next one.  Two obliterators in a squad means that you can statistically rely on lascannons should you wish to fire them.  I actually prefer plasma cannons for the opening salvo in most cases as the scatter isn't usually too large, and we get a high S combined with significant AP.  That said, the assault cannons must now be looking more favourite for an opening salvo from a pair of well positioned obliterators.

The mark of Slaanesh on obliterators is pointless in my opinion -- they don't have the close combat weapons available to take advantage of the increased initiative short of switching off the powerfists!  And why would you do that?  Fluffy reasons only.  (and yes: that is sufficient reason for many players! especially given how cheap this mark is!)

The mark of Khorne supposes that you'll get a charge in .... less likely with slow and purposeful that you've positioned them to do that in the first place.  Counter-assault is good, but... then again, I just think the final two marks make superior choices.

The mark of Tzeentch is good here: a 4+ invulnerable save will prove excellent.  Combine with deep-striking obliterators to create a strong threat in the opponent's deployment zone that stands a chance of hanging around.

The mark of Nurgle is similarly good: T=5 obliterators also increase survivability.  And the synergy with Epidemius is obvious to the daemon players amongst you.

Veterans of the Long War on the other hand is not too special on the surface.  But poke a bit deeper and the +1Ld bonus is good: note that obliterators have lost their fearless rule, so anything will help here.  Hatred of space marines doesn't really matter to shooty obliterators though, but can add flexibility to a deep strike threat.  Feel free to add a very shooty character to mitigate the fearless loss (e.g. Tzeentch sorcerer).  Add in a bastion with quad-gun as well - that could work out very well, but I've not tested it out yet.

So, I think my favoured set up will be this one:
2 Obliterators, Mark of Nurgle, Veterans of the Long War (158 points)
Solid, defensive, shooty and going to stick around for a while!  Swap out mark of Nurgle for mark of Tzeentch for a few more points (feel free to recover them by ditching Veterans as well) and try some risky deepstrikes and use this unit as a distractor instead.  There's very little not to like about these two set-ups.  But my personal favourite will be the Nurgle build.  They're just going to be tough to remove, full stop.
Posted by jabberjabber at 14:59

"I think many chaos players will situate them in some ruins / buildings with a good line of sight in their deployment zone for most of the game." - I would actually never do this. If you're going to get your points' worth out of these guys, you need to play to their strengths, and one of those strengths is the ability to fire on the move. They can contineue to find straight lanes of fire and assault weakened units as the game goes on, which separates them from other units such as Havoks that can bring infantry-based heavy firepower.

Mark of Nurgle is why these guys are good; seriously, you MUST buy it on these guys. Why oh why? Because otherwise they are T;4. And T:4 means missiles, lascannons, battle cannons, bright lances, meltas, power fists, etc. will all instant death you. These guys are expensive, and you cannot be having them die in a single shot. Seriously, buy this mark or don't take them at all; without Mark of Nurgle, Havoks are just better.

I agree with Tim. While the 4++ would be nice, with 2 wounds, these guys have to have Mark of Nurgle. If there wasn't so much flyer spam and if I had any confidence in my ability to scratchbuild Oblits with bionics (my steampunky version of MoN), I'd totally run a couple of these guys.

I take Obliterators even with fliers out there. If you've got Havoks with autocannons, forgefiends, Helldrakes, or any combination, you can afford to take a unit that's not stellar against fliers. Even without great anti-air, two or more assault cannons off of the Obliterators will hit a flier, no doubt.