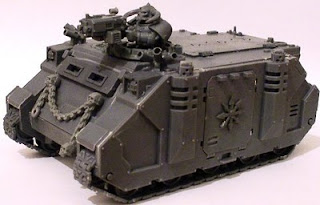 The Chaos Rhino deserves a quick mention in the review of the new chaos space marine codex. To be fair, the rhino is a pretty standard piece of kit and is not vastly different to the loyalist analogue. It is the potential upgrades that can set it aside from its loyalist counterparts, so we'll look at a few example builds in turn.  (and you'll notice I've avoided making any statement about whether armies should be investing in such tanks any longer!).

Chaos Rhino with combi-bolter, search light, smoke launchers, repair, havoc launcher (47 points)
The havoc launcher is a splendid upgrade that just got cheaper in the new codex.  Don't underestimate the threat that the havoc launcher can have: regular S5 pie plates with re-rolls to hit are pretty awesome to "ping" enemy hold-outs with, even if they get an armour or cover save.  I'd recommend taking several of these rhinos if you're going to go down this route, just to keep the threat level high.

Chaos Rhino with combi-bolter, search light, smoke launchers, repair, extra armour, destroyer blades, combi-melta (70 points)
An expensive variant, to be sure. I see the purpose of this one is to deliver its (valuable?) contents to the heart of the battlefield, using the extra armour and smoke launchers to keep it intact.  The combi-melta (which could be dropped if points are an issue) is there to augment the potential of the riders to take out targets (recall, two passengers can shoot from the hatch on the top).  Finally, once the passengers have been delivered, the destroyer blades come in to play.  If the rhino has survived this long, its role is now to tank shock and destroy any units hunkered down on objectives.  Take a few destroyer blades in an army for a themed, shocking potential.

Chaos Rhino with combi-bolter, search light, smoke launchers, repair, extra armour, dirge caster (50 points)
Get the assault-orientated passengers to where they need to be (using smoke screens and the extra armour), disembark and charge (but sadly not in the same turn).  Keep the rhino close so that the dirge caster prevents overwatch.  This isn't a particularly good set-up, as the dirge caster would be superior in conjunction with a land raider (which does have an assault ramp), but can be effective if positioned just right on the turn that they disembark.