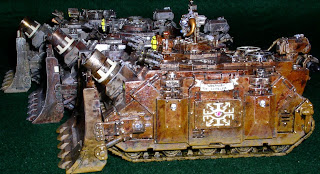 The vindicator just got slightly better in my opinion. Firstly, the basic chassis costs less than the previous codex and secondly, it gets access to a true siege shield for the first time - as an option! Combine that with access to the regular chaos vehicle equipment list and you have a very nice customizable tank for a reasonable points cost. I think this one is competitive for the heavy support slot ... depending on the type of army we're wanting to field of course. I can't see too many Iron Warriors players passing up the opportunity to field one of these! (but then again, Iron Warriors have soooo many vehicles to select from these days that the newer miniatures must be appealing!).

The reason I'm quite excited by the vindicator and its access to the armoury is that we now have an upgradable vehicle that won't be saying bye-bye to its demolisher cannon on every weapon destroyed roll.  Grab an extra weapon to lower the chances.  Take daemonic possession.  Extra armour.  Its all good.  Roll forward with your S10 cannon and shoot away!  This is the only S10 ranged weapon available to chaos players, so enjoy it!  Let's look at a few builds that may appeal.

Chaos Vindicator, daemonic possession, siege shield (145 points)
This costs the same as the old codex, but replaces the dozer blade with a true siege shield.  BS3 is a small price to pay for a 2+ ignore shaken and stunned.  Add on a cheap second weapon to taste and you've got a winner.  This should/would be the basic set-up for most "standard" chaos vindicators.

Chaos Vindicator, siege shield, daemonic possession, destroyer blades, warpflame gargoyles, combi-melta, combi-bolter, extra armour (190 points)
This one has the lot!  And you're paying dearly for it.  So this is just a points sink and not to be used outside apocalypse!  Or ever!  Still, I'm entertained by the possibilities here!  (and yes: you *can* take both the combi-bolter and combi-melta on a single vehicle).

I would take these guys if they were in another slot. The other chaos Heavy options are just too good by comparison.