Gift of Mutation in the New Chaos Space Marine Codex 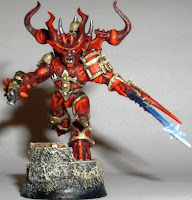 Before continuing to review the HQ options in the New Chaos Space Marine codex, it is worthwhile pausing to examine the Gift of Mutation chaos reward.  This reward costs 10 points for many chaos lords and aspiring champions, but is the reward worth taking before deployment?

To figure this out, I'm going to go through the possible results for the Gift of Mutation results and try to attach a points value to them.  I'll then take a mean and see if that is worth more, or less, than the 10 points that it cost to purchase the upgrade.

Firstly, I note that six of the results of the chaos boon table ends up with nothing.  We'll give that zero points.  Both spawnhood and dark apotheosis must be re-rolled, so we'll ignore them.  That gives a total of 32 possible outcomes, of which 6 result in nothing.

Let's go through the rest of the possible results. Unless otherwise stated, the points cost given has been sourced from 2 chaos codexes ago.  The points cost before the slash is what its worth to a multi-wound character, the points cost after is to a single wound (aspiring champion type) character.

+1 attack is worth 10 / 5 points, in line with the old mark of Khorne (rather than daemonic mutation which costs more);

+1 weapon skill is tough to judge, but we'll simply call it 5 points and be done with it;

+1 ballistic skill is like WS, so again, we'll just call it 5 points;

+1 initiative is approximately the same as a mark of Slaanesh, so we'll give that 10 / 5 points;

+1 strength on a ranged weapon is an oddity, so we'll give it 10 points, inline with the +1 melee
strength;

fleshbane is an interesting one, a bit like an enhanced poison attack, or daemon's noxious touch.  Let's give that 10 points;

adamantium will helps with deny the witch, but its not over powerful.  How about 5 points?;

shrouded gives a solid cover save (or cover save improvement) which we'll apply 15 / 10 points to;

eternal warrior is like the old daemonic rune ability which was worth 35 points.  I think that's over-costed now, so we'll lower it to 20 points;

witch-eater is an oddity that circumstantially punishes enemy psykers. Probably about 10 points;

crusader - longer run moves are not too great, so how about 5 points;

icy aura is a low initiative strike effect that amounts to +1A, so again, 10 / 5 points;

hatred means re-rolling misses in round one of combat, 15 / 10 points I think;

shred re-rolls failed wounds, and is certainly worthy of 15 / 10 points as above;

instant death attacks are okay, so we'll give them 10 points;

stubborn is not so great on a character since they're almost exclusively fearless, but on a squad leader it might prove okay once in a while: 0 / 5 points;

fleet is not as great as it was in 5th edition, so we'll append 5 points to that;

The final option is multiple boons which results in an average of 2.5 more boons.  The average of all the above (including null results) is approx. 21 / 17 points.

What are the means of all the above?

It therefore seems that the gift of mutation boon is not quite worth taking.  Let's suppose I've been a bit mean with some low points costs though.  I'd need to find an extra approx.40 points for character abilities in the above reckoning.  So maybe I've undercosted poisoned attacks ... there's 5 poitns.  But then I'm struggling a little bit.  At best, gift of mutation appears to be a break-even proposition for independant characters.  But for regular squad leaders, I think we're going to forget about it.
Posted by jabberjabber at 15:25

I think the fact that the average is so much higher than the mean really demonstrates what's going on: most of the upgrades are worth 10 points, but there's an unfortunately large chance that you will not get a reward. To my view, that is an argument for taking Gift everywhere. Lets face it, statistically taking it once could be great or could fail, but taking it on your HQ and 3 plague champions virtually guarantees you get 40 points worth of reward out of it. I say go for it, buffs are awesome.

That said, its the first line item to get cut when points get tight.

I think you've undervalued a few of the items eg fleet and poisoned attacks. Expanding on Fleet: generally it will give you 2-4 inches further charge range and allows you to potentially negate the nasty "1s and 2s" rolled. A failed charge can hit hard especially after receiving overwatch. You've made statements like "Adamantium will.. its not over powerful", which may be as a result of not facing Rune Priest heavy lists. Their Jaws sniping ability can cost you very heavily and the ability to save against that with your Lord is invaluable.
The other thing to consider is the application of the Gift in your game tactics, an example being crusader. Have you explored how to use the longer run move? Perhaps your Lord could go off and kill a tank while the unit he was with have a crack at another target for a turn?
I agree with Ian, there are a few "lower value" items, but some of the others are such high value, it's still worth the risk.
Food for thought, but Excellent appraisal none the less!

Thanks guys! Glad to have provoked your comments and thoughts -- much appreciate your feedback :)