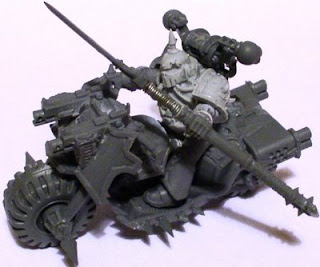 The not-so-humble chaos lord is the Swiss army knife of the new chaos codex.  Their intrinsic strength is two-fold: (1) their customizability and (2) the cheap base cost.  Of course, these two properties combines can readily lead to chaos commanders spending lots of points on their chaos lords and they suddenly become a points sink.

One of their primary perks is to "unlock" Khorne Berzerker, Plague Marines, and Noise Marines as troops (NB: Sorcerers unlock Thousand Sons Rubric Marines, rather than chaos lords themselves).  Taking any of these marks will still leave the Chaos Lord under 100 points and can be a good choice if a named HQ choice has not already been taken (e.g. Typhus to unlock plague marines as troops).

But given the nature of the chaos codex, we really want to kit the chaos lord out for close combat glory and the pain of our opponents.  With some luck, he'll be defeating opposing characters and squad leaders for some rolls on the chaos boon table and occasionally turning into a daemon prince. And therein is one guiding principle that I contend is useful for thinking about the chaos lord: the daemon prince costs a naked 145 points.  Therefore we want to build a chaos lord to be about the same points value (minus the mark ... or 155-160 points with the mark).  If it costs more than that, we'd better make him a super-lord capable of performing lots of tasks during the course of a game.  If gunning for a daemon prince result, I'd note that a dark apostle might be a useful guy to have tag along as a second HQ choice for the chaos boon re-roll.

Let's have a think about a few alternative builds:

Chaos Lord, Mark of Nurgle, Bike, Burning Brand of Skalathrax, Power Weapon (145 points)
Ride up on your bike with a squad of bikers and hit hard.  Alternatively, a squad of chaos spawn might also be entertaining to match the lord up with (recall that spawn can move as fast as a bike!).  Swap the power weapon for a power fist or daemon weapon (or similar) for taste and potentially veterans of the long war as well.  Team up with Epidemius to rack up the tally quickly.

Chaos Lord, Mark of Khorne, Bike, Axe of Blind Fury, Sigil of Corruption, Veterans of the Long War (160 points)
A Khornate analogue to the above, and perhaps a little better in some respects.  Team up with other bikers or spawn and wreck havoc!  Swap the bike out for a Juggernaut of Khorne to taste?

Chaos Lord, Mark of Tzeentch, Terminator Armour, Power Fist, Dimensional Key (167 points)
This is an interesting build, built for armies with many deep-striking components.  A sorcerer might be a better option here, but I include it here as an entertaining Tzeentch option (but that mark could readily be one of the other gods).  Place this guy in side a big unit of other terminators and see what happens next.  Once the dimensional key is activated (hopefully by turn 2?!), bring down the rest of the army nearby this deathstar unit and work outward (or just claim linebreaker without trying).

Chaos Lord, Mark of Slaanesh, Jump Pack, Lightning Claws, Veterans of the Long War, Sigil of Corruption (155 points)
Something of a lone star Lord, but could be matched up within a raptor squad.  The idea here is to get in to combat quickly and strike first (at high initiative) to rid yourself of an opposing character, or weak squad.

Finally, the last alternative would be to simply run a "naked" chaos lord.  Given that they're so cheap, this is actually quite a viable option.  Such a naked lord would either be placed in a squad to confer their fearlessness to them, or hang back with a havoc squad (or otherwise) and man a quad gun on a defence line.  Given that they have BS=5, this is one of the cheapest ways in which to bring a good marksman to man a quad gun!
Posted by jabberjabber at 11:38

I do think a naked sorcerer is better than a naked lord. 5 points less gets you a psyker with a power weapon and one mastery level. There's more utility there. That said a lord with just a mark is useful for conserving points in a list with a lot of cult units. I'd stick them in a unit of cultists for fearless, and seriously consider throwing in a power weapon, because having some combat punch is going to be worth 15 points.