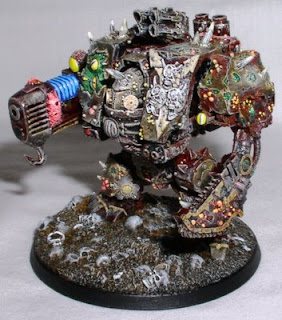 Call them Dreadnoughts.  Call them Helbrutes.  Either way, they just got better in the new codex.

Reason 1 they're better: they are not automatically crazed -- only when hit by enemies.

Reason 2 they're better: their fire frenzy targets enemies, not friends.

My base set-up (pictured) with a plasma cannon got 5 points more expensive, but given the changes to crazed, I think its an improvement.

Helbrute with pair of Thunder Hammers (110 points)
Race toward enemy lines (or drop-pod in via a Dreadclaw) and hammer away.

Helbrute with Powerfist containing in-built Heavy Flamer, Twin-Linked Lascannon (140 points)
I like this set-up.  He shoots from the opening at opportune targets as he advances toward more squishy enemies.  Target transports, pop them open and engage the contents.  Possible even better than the equivalent points of terminators?  Hmmmm - now there's a math-hammer conundrum.  (answers welcome).

Helbrute with Missile Launcher and Plasma Cannon (120 points)
For support purposes.  Sit on the back lines and shoot volleys of templates at the enemy, plus the odd krak missile.  Probably better to think about an obliterator or two instead for support to be fair though.

So overall, I like them, but they are competing with other elite slots.  I'd be tempted to take several if I was going to take them unless its my Nurgle dreadnought (which I just like the sculpt and paint job of -- see image).

I rarely see the point in taking lascannons on, well, anything. They sit somewhere in the middle of the anit-tank range of guns; they're stronger than autocannons but lack their rate of fire, but not as nasty as demolisher cannons and melta weaponry but out-range them. The problem is, lascannons are so expensive that I can scarcely see that value in a mid-capacity weapon. More importantly, the lascannon's cost is supposed to be representative of its range, but between bikers, raptors, terminators, and mechanized CSM squads, chaos can bring the much deadlier meltagun to bear quickly, at a very competitive cost. That, and Vindicators got much better now that they can load-up on extra guns, so if you want to be a bit more stand-offish you can. The lascannon just seems to pay too much money for what should be a competitively priced, mid-class weapon that one would select as a nice all-rounder to save on points.

Whilst I quite agree with your points, I find the lascannon a nice addition if you're fielding a Helbrute with that additional missile launcher. He still gets the re-roll if you miss, and the addition of a missile launcher gives the opportunity to target squads while still retaining a greater danger to enemy armour. Of course, it's all about your play-style. I use mine as a ranged support, always have.

@Grim Darkness:
I can see slight benefits to taking the lascannon over the reaper, and that's because they lascannon's 48" range coincides with the missile launcher's 48" range nicely. The problem is, the Hellbrute is a tard, with rules written by tards, that has a 1 in 3 chance of ignoring your plans and sprinting full-tilt towards the enemy as soon as it gets dinged, making your longer range meaningless. That, and your missile is aiming at light armor; it's not going to scratch anything with AV13+ really (due to its crap fire rate more than S:8), so you're better off supporting its anti-tank efforts with the reaper, as it is better suited than the lascannons to taking out light armor. As well, if you're going to use the missile for anti-infantry duty, the reaper is better.

Given that the 5th edition rules made players roll for crazed every turn, in a 6 turn game it was expected that at least 1 turn the dreadnought would not be firing. That is now no longer the case. So I think the implementation of the modified crazy rule is an improvement. Just an opinion.

@Jabber:
Honestly I think the Crazed! rules are just a little better. They only happen when you get hit, but now it's a 2/3 chance that they ignore your instruction rather than a 1/3. And yes, I know that sometimes what you roll may coincide with what you wanted to do anyways, but generally a helbrute wants to walk about a bit and fire its gun, and rolling either a 1 or a 3 will mess that up. It's still better, but not so much that I'm absolutely crazy about them. I use them, but only to achieve more vehicle saturation. @2000 points you never see them; I have plenty of room to roll my Predators onto the field once double force-org opens up.

The Dreadnaught is still not worth taking. They are way too easy to take out in assault and there are better options...

I've had some success running a multi-melta/heavy flamer helbrute combo'd with Huron's master of deception. If done right, it allows for
melta range turn 1, usually to pop a transport or front line IFV. Then when you're that close to the enemy, any of the crazed rolls usually
work to your advantage. Either you get 2 more melta shots off, or you get to charge in and pulp something. It doesn't last long,
but it's a great opener/distraction