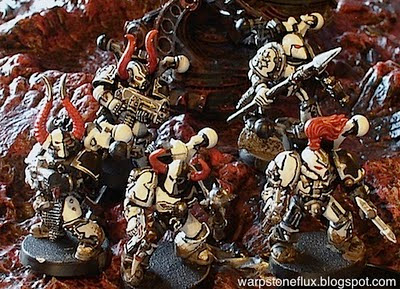 The most fundamental and quintessential unit in the entire codex: the basic chaos space marine troop squad is one of the most flexible, but simultaneously one that needs much thought about how it is to be set up.

One aspect that the troops selections in the new codex need attention with is fear (or, rather, fearlessness).  Sure, they're cheaper than their loyalist cousins, but they do not get ATSKNF, or combat squads.  Running them with an HQ that ensures their fearlessness seems to be key to keeping them going in the game.  That, or load them up in a rhino and never get out of it unless they have to.  As an alternative, the Icon of Vengeance can grant the entire unit fearless, but the Icon must remain in play.  Remember that Icons can be sniped and be poorly positioned so that they might fall early!  So, if we're going to be taking such an Icon, it is imperative that the marines race in to the "protection" of close combat as expediently as possible.

Let's have a look at a few builds that may appeal:

20 Chaos Space Marines with combat close weapons instead of bolters, Mark of Khorne, Icon of Wrath, 2 flamers, champion with power weapon (355 points)
A large blob of Khorne boys, preferably run with a Dark Apostle, Chaos Lord, or Kharn.  Infiltrate them with Huron for laughs.  Or swap out the Icon of Wrath for an Icon of Vengeance.  They're unsubtle, large and menacing, but they'll get the job done by avoiding the worst of AP3/2/1 weapons (like incoming vindicator shells). Veterans of the Long War may be a good utility addition too.

10 Chaos Space Marines, with additional close combat weapons, Mark of Nurgle, 2 plasma guns, Icon of Vengeance, champion with power weapon and combi-plasma (268 points)
An unsubtle team of Nurgle worshippers to take on (at range) many of the tougher units in the game (or even snipe at light tanks to glance them in to wrecks) before closing for some close combat thrills.  I suspect that plague marines themselves might be better at this task to be honest.  But, this kind of unit is what I have in mind for use with Fabius Bile's ability (although if I did that, I'd drop the Icon of Vengeance totally, of course).

10 Chaos Space Marines with close combat weapons instead of bolters, Mark of Slaanesh, Icon of Excess, champion with a pair of lightning claws, 2 meltaguns, rhino with havoc launcher (287 points)
Roll up in their rhino and aim to take out enemy vehicles with the melta guns.  Assault the inhabitants in close combat using the enhanced initiative and feel no pain granted by the (amazing-outside-of-Nurgle) Icon of Excess.  The rhino can take shots at S5 up to 48" away using the havoc launcher -- don't under-estimate how good that can be. Possibly team up with a Slaaneshi HQ to taste.

5 Chaos Space Marines, 1 melta gun, champion with combi-melta and melta-bombs, Icon of Vengeance, Rhino with combi-melta (170 points)
A small, utility unit designed to gun for enemy vehicles and dreadnoughts.  Not very inventive, but then, they don't need to be.

10 Chaos Space Marines, 1 melta gun, 1 flamer, champion with power fist, Icon of Vengeance, Rhino with Havoc Launcher (252 points)
A bland, but totally adaptable tactical squad of traitor marines.  The power fist on the champion is a risk (given that he has to issue challenges all the time) so perhaps a power weapon plus melta bombs (5 points cheaper overall) may be better most of the time, but its there to give a threat to vehicles and dreadnoughts. Add Veterans of the Long War for taste.

Sorry Tzeentch, I just don't have a use for you outside of fluffy, characterful lists.
Posted by jabberjabber at 03:59

Despite the importance of Fearlessness and ATSKNF, a Fearless character and/or Icon of Vengeance isn't always something you want. Fearless prevents you from going to ground, which is... bad. While a mid-field unit should be Fearless, a back-field unit camping one one of your objectives benefits much more from VotLW, so they can still go to ground. Consider this:
10 CSM with mark of nurgle, plasmagun, champion with power fist, VotLW, second weapon of your choice.
Toughness 5 dudes with Ld:10 that can camp in ruins all day long. Give them a second plasmagun or a melta and they will offer strong resistance to any vehicles that try to shoot them off of their objective, and the fist should give characters/MCs something to consider. Add close combat weapons to taste. I would NOT advise going above 10 guys, as you can't get any more special weapons, and 10 guys in cover with T:5 should be plenty to hold an objective; any more is just a waste of points.

Hi Tim -- I take your point! I just guess that having been shot, rammed and otherwise routed off backfield positions without fearless before today I'm just being overcautious. Cheers!