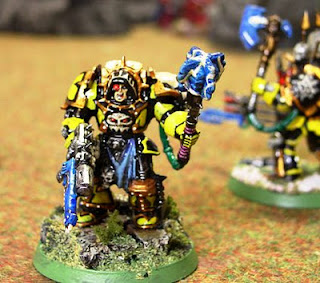 Chaos terminators often strike loyalists as being "cheap". But don't let that fool you: their lack of fearless and ATSKNF means that they're more likely to be routed and swept in combat. That's the trade-off for cheapness. As with the basic chaos space marine troops, it is this lack of fearless (or similar) that hurt the chaos space marine commander fielding chaos terminator. Clearly, teaming up with the likes of Abaddon or Typhus will help with that.

Secondly, don't forget the codex FAQ: terminators can take replacements for either basic weapon (combi-bolter or power weapon), not just one of them as the original wording implies.

Let's take a look at a few builds and associated tactics. (Bear in mind that there is also a built in choice to make about which power weapon to take as well).

3 Chaos Terminators, 3 combi-meltas, 1 chainfist (122 points)
This is the classic "termicide" set-up.  Deep-strike next to the target vehicle and annihilate it on the turn they arrive (assuming reasonable or no scatter in deep-striking).  The chainfist is there to give the terminators some threat to other vehicles even after the melta shots have been used up, and to any lurking dreadnought that might counter-strike.

5 Chaos Terminators, 4 combi-flamers, 1 heavy flamer, 2 chainfists, power weapons to taste, Icon of Vengeance (246 points)
A threat to those back-of-the-field devastator squads.  Deep-strike (or roll up from a land raider) and flame them to the Warp.  If they survive, assault.  The chainfists are there to both worry nearby vehicles  and help with assaults.  The icon is strictly to prevent routing, but does account for most of the points cost above 200 (the equivalent of a loyalist squad with ATSKNF ... but obviously they're not as role-focussed as this bunch).

5 Chaos Terminators, Mark of Nurgle, 3 powerfists (208 points)
Chaos' answer to loyalist terminators ... but with better toughness.  Take an Icon of Vengeance if you're worried about being swept.  (a cheaper alternative would be 5 terminators, 1 power fist, icon of vengeance - 199 points - as a loyalist analogue). Add Veterans of the Long War to taste.

6 Chaos Terminators, Mark of Slaanesh, Icon of Excess, champion with pair of lightning claws, 1 chainfist, 3 combi-plasmas, 1 heavy flamer (296 points)
Terminators with feel no pain?  And they're Slaaneshi rather than Nurglesque? You bet!  Run with a Slaaneshi character (a chaos lord even), and head for combat.  This unit is kitted out to take advantage of the higher initiative, but the chainfist is there for added threat overall.  The combi-plasmas are for taking out light tanks or heavy infantry, whilst the flamer's use is obvious.  Despite the variety of arms, this unit is still an anti-infantry set-up.  Potentially drop a few members for a pure combi-plasma termicide squad, but otherwise, these guys are ready to go.  Just need a Land Raider now perhaps.

10 Chaos Terminators, Mark of Tzeentch, 2 Reaper Auto-cannons, 4 chainfists, Icon of Flame (413 points)
Fan of Apocalypse?: go big and get a 4+ invulnerable save for a strong unit of on-the-board-to-start terminators.  Back up by adding Ahriman to give fearless, or take a daemons allied detachment for some Fateweaver antics.

5 Chaos Terminators, Mark of Khorne, 2 powerfists, Icon of Wrath (211 points)
Show those loyalists what "skulls for the skull throne" means, and at a comparable points cost.  Take a land raider to taste and perhaps a pair of lightning claws on the champion and Veterans of the Long War upgrades.  Even worth considering a Gift of Mutation if there's some points left-over.  This unit will need accompanying with a HQ character to avoid being swept ... but then again, they shouldn't be getting swept, should they?  They should be causing more wounds than they receive every round.  If they don't, then even their blood is welcome.  Everyone wins in Khorne.

4 Chaos Terminators, 2 pairs of lightning claws, 2 chain fists, 2 combi-meltas, Mark of Tzeentch, Veterans of the Long War, Icon of Vengeance (241 points)
A dual-purpose squad.  Firstly, deep-strike to take out a target transport with the combi-meltas and/or chainfists.  Deal with the inhabitants with the Lightning Claws.  Drop the Icon and the Veterans of the Long War to reduce the points downward.  The Mark of Tzeentch is purely for the 4+ invulnerable save (in case one is tackling a command transport and the inevitable contents therein).

I like chaos terminators: they do what they should and with minimal fuss.  They're a strong competitor for the elites slot in the new codex.
Posted by jabberjabber at 15:31

This article failed to comment on what I think is the most imporant issue with Chaos Terminators: the selection of power weapons. Do we stick with swords for tried-and-true marine killing, but then stand no chance against other books' terminators? We could go axes but lose the benefit of initiative. Is there any benefit to mixing in power mauls? is a set of lightning claws worth the investment?
Personally I think that you should carry a chain fist and 2 power axes, just to handle the odd tactical terminators you will run into, as well as characters and odd units with 2+ saves. 2 models with a single lightning claw each still alow you some initiative and help wound tougher models, which is where terminators' melee niche is. Chaos has plenty of other units that can handle hordes of xenos, and several units to handle MEQs in melee. I would suggest the above setup to give your terminators a handle on other termies and monstrous creatures, which are units that will give your other melee units trouble.

Hi Tim -- great point. I'm in the process of writing a follow-up post about "which power weapons" when we're given the choice.