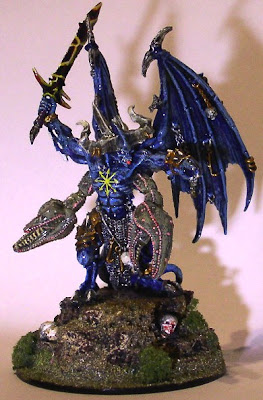 The daemon prince of the new chaos codex is significantly more expensive in comparison to the old codex, but his/her statistics have received a boost. For the chaos space marine commander, the daemon prince is still a very powerful choice, but one that is not quite as automatic as it used to be.


Consider a 5th edition daemon prince: with a mark of Nurgle, wings, doombolt -- comes in at 160 points.

To build a 6th edition analogue, we'll take the mark of Nurgle, wings, power armour and level 1 mastery -- this comes in at 245 points.  This is over 150% of the points of the 5th edition daemon prince.  And lacks eternal warrior (for reasons that I suppose will never become quite clear).  I hope the daemons codex doesn't follow suit, but I fear it must for comparability.  This is bad because at a base T=5, this means he's going to get his derrière kicked by every other monstrous creature in the game.  Seriously: please FAQ this Games Workshop!

That said, chaos players will still be packing daemon prince models in to their armies so that they can upgrade chaos champions and lords through dark apotheosis.  (and chaos spawn too). Just a pity that when they get upgraded, they don't have the chance to get wings in the process! (I mention this because in the old Realms of Chaos, the upgrade to Daemon Princehood through the eye of god rewards frequently resulted in the addition of wings to the chaos champion).

Below, I consider a few daemon prince builds below, some better (and more points efficient) than others.

Daemon Prince, Wings (185 points + mark needed)
A naked prince with wings ... but you'll need to pay extra for a mark.  Set him up behind a line of sight blocking piece of terrain and then fly him in to wreck havoc on enemy squads or vehicles.  Vector strike other flyers to taste.  Cheap, effective, but reliant on the invulnerable save and T=5.

Daemon Prince, Mark of Nurgle, Wings, The Black Mace, Power Armour (265 points)
This is a really terrifying build.  With enhanced shroudedness, a good save, fast moving, this guy can get in to combat fast and cause real mayhem.  The black mace, because it is wielded by a monstrous creature, gets the same monstrous creature AP.  Causing one wound by the daemon prince is relatively easy, so activating the 3" blast from the black mace should happen every combat round that the daemon prince is in.  This build is therefore one that can kill entire tactical squads of marines in a single round of combat (with a little luck).  But we're paying a suitably high price for it.

Daemon Prince, Mark of Tzeentch, Level 3 Mastery, Spell Familiar (250 points)
Seems to me that one role for the daemon prince would be a shooty firebase.  This build looks to take on that role.  Hang back, shoot, and engage in the occasional melee.  The familiar is there to help counter the Ld=9 of the daemon prince (seriously: why Ld=9 on an immortal creature of chaos?!) and get him to pass psychic tests more regularly.  And just for fun, why not have him man a quad gun behind an Aegis defence line to make use of his excellent BS?

And that's about it.  We can think about a Khorne or Slaanesh mark, but I think the points are better spent elsewhere.  I can't see many players taking daemon princes regularly any longer.  And gone are the days of double daemon princes at low points limits -- and of regular marks of chaos (sigh).  Much better to upgrade a chaos champion I feel.  I'm sad that my winged daemon princes won't see much play inside chaos space marine forces any longer.
Posted by jabberjabber at 11:29

The daemon prince changes were admittedly pretty saddening. I am still planning to run one on my pure nurgle list, but I went from avoiding the expensive Daemons version to flocking to Daemon allies to ensure I don't waste 1/8 of my army just on a daemon prince who dies to ID and S10 like he's a chump. The fact that the Mark of Nurgle doesn't give him T6 is really frustrating, especially since his shrouded only makes his save good when he's flying and can jink (which is a cover save, so weapons that ignore cover make him sadface). Also, he can be grounded just by taking a hit, not even a wound. Sigh. GW seems to really hate monstrous creatures, they are straight up wastes of points in 6th, unless they are free or in the list for a non-combat support role (basically just tervigons).

The 185 point plain deamon prince is not legal. First option in codex entry says "must be upgraded to" a marked deamon prince.

Yep - I'm pretty sad about the daemon princes myself.

@dreadthor: you're right -- the naked prince has to be a daemon of something ... there goes the daemons of independent chaos as well :(

Played a game today and got a deamon prince from the boon table on my plague marine champ. Imagine my disappointment when i realized he was t5 and only has a 5+ invul, as evidently when the champ acended all his power armor fell off. Then he died to bolter fire. :( true story

@deadthor
actually, if you pay close attention, it says your daemon prince retains the MARK of the champion it ascended from. Your Plague Marine champion actually *would* turn into a T6 Daemon Prince. This seems to be the only way to get a daemon prince with an actual mark.