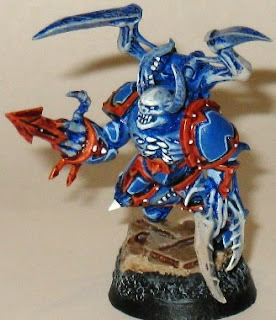 Compared to the previous codex, Possessed chaos space marines are undoubtedly superior.  Although there is some randomness in the abilities that they get, none of them are bad (as was the case previously!). And they're fearless.

But that's about as good as a review that they're going to get from me.  I think the lack of guaranteed combat effectiveness (read: Vorpal Claws; grenades) are a large negative for Possessed.  I doubt we'll be fielding many of them, outside of fluffy purposes.  Given their points cost, we should probably be looking elsewhere in the codex for viable close-combat effectiveness.

Nonetheless, here are a few set-ups that might be worth considering:

9 Possessed, Mark of Khorne, Icon of Wrath, Veterans of the Long War, Land Raider from the Heavy Support Section (524 points)
Slot in a Khorne character (e.g. Kharn) and use the land raider to get in to assault as soon as possible.  Not an intelligent or brave option, but it'll work up to a point.

20 Possessed, Mark of Slaanesh, Icon of Excess, Veterans of the Long War (620 points)
Only for the brave: charge across open territory without any weapons.  Hope to make it to combat (aided by the Icon) before getting blasted.  Alternatively, take with an infiltrating character (Huron or Ahriman).

14 Possessed, Mark of Nurgle, Veterans of the Long War, 2 gifts of mutation for the champion (468 points)
A variant on the above with superior toughness and possibly more likely to make it.  The number of possessed is strictly for fluffy purposes.  The gifts of mutation are for fun only.

9 Possessed, Mark of Tzeentch, Veterans of the Long War, 2 gifts of mutation for the champion (317 points)
Yet another variant, this time for Tzeentch.

I dunno, my 8man unit of Possessed with Mark of Khorne have 5 attacks each on the charge, 4 on the counter-charge, and have absolutely torn through everything from Bloodcrushers to Terminators, regardless of the lack of AP on those claws of theirs. A pretty damn good points investment if you ask me, especially transported in a vehicle with a Dirge Caster.