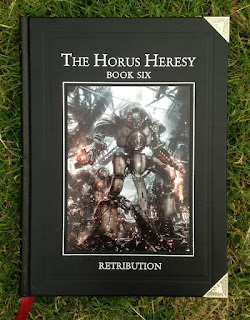 Background.
The Leviathan is a Terra-developed alternative to the Contemptor dreadnought. As if the contemptor could get any cooler, the designers just had to add an extra degree of fascination and mystery to this beast! The Mechanicum came to see these as a weapon for a future civil war that could handle even their constructs. And they probably were not wrong. But then the Heresy got in the way before any such rift could develop within the Imperium.

Strengths.
The invulnerable save is a wickedly good 4+ on this machine and it has a very good strength coupled with decent baseline attacks. The armour is sound, but for the price a land raider might prove a better idea.

The weapons are what makes this variant dreadnought stand out though. The melee weapons are formidable with either the armour bane (siege drill) or severing cut (siege claw) options that both have inbuilt melta guns. The graviton flux bombard is in a league of its own for many special rules and the rolling death it has. I really like the cyclonic melta lance as well, even if its not a lance weapon. It is superb at close range.

Speaking of close range, you're probably going to want to purchase a dreadnought drop pod for the purposes of getting close.

Oh and don't forget its a talon. We can take up to three!

Weaknesses.
The blast is stronger and bigger than what might ordinarily be expected for a vehicle explodes result, but hey, that's fine I guess.

The main issue I see with the leviathan is the points cost. It is actually rather expensive as the builds below start to illustrate. Most of the time, a land raider might be a superior choice due to a better AV all around and the capacity to carry troops. That said, I do think a leviathan has its niche. Particularly in cities of death, and zone mortalis games. I think those two scenarios it would be devastating in. But in regular games, or ones with sparse scenery, I'd opt for something else probably.

Builds.
Leviathan, siege claw, graviton flux bombard (290 points).
A mixed purpose dreadnought that can bring pain at mixed levels. I kind of like it for the graviton effects myself.

The reason to take the dreadnought is firepower and flexibility. With BS5 and the invun save, not to mention carrying anti personnel weapons (and firing both of them) a Leviathan dreadnought fulfils a very different battlefield role than a Landraider which only has lascannons. Raiders also can't hide out of LOS.

Thank you for an excellent series of reviews - they're a great read.

Your points are well made and well received. I don't disagree with you in fact. I think its just in my local meta game that I would prefer land raiders to add to my Alpha Legion at the moment. I totally agree that the Leviathan has its role and it is very different to a land raider :)