Background
Yes -- even in the Horus Heresy, you can find Aegis Defence Lines. They're basically barricades designed to give a bit of a cover save.

Strengths
Park your ranged tanks behind them. Place a full Lasrifle Section behind them (and preferably on top of an objective too). And then play along!

Weaknesses
If upgraded with a ranged weapon (Quad Gun, Icarus Lascannon), beware that it can be captured by enemies and used against you.

Builds
Most of the builds are already covered in the core rule book.

Ammunition Dump: use this for troops with BS=3 that are sitting behind it for the cover save - preferably Lasrifle Sections?

Comms Relay: this depends on the army build. If you have deep-strikers it could be a huge game winner.

Icarus Lascannon: great for shooting fliers out of the sky with a solid penetrating hit.

Quad Gun: lower strength than the Icarus, but twin linked and perfectly capable of literally glancing a flier out of the skies. 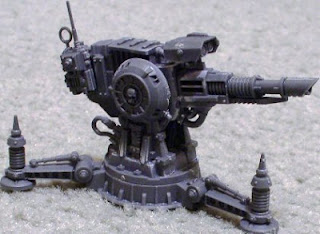