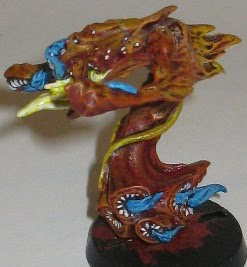 We all knew that something had to be done about these guys!  I was expecting a bit of a reversion to the original 5th edition rules myself.  But instead, the actual attack from these guys (the flames themselves!) got altered.  So, the flames might kill some models - sure.  But if they don't, the enemy gets an improved (or 6+) feel no pain roll!  Yikes!  This makes the flamers such a gamble!  With only AP4 on Flamer's flames now, the Heldrake looks a much better option to be honest - go Chaos Space Marines if you want hard hitting flamer templates.

On the other hand, they are toughness 4 with two wounds each.  That's not bad for the price tag, but it's not brilliant either.  A pyrocaster upgrade costs 5 points and makes one model BS5.  That's pretty decent and could pull a duty on quad guns.  Indeed, having flamers on a quad gun might be somewhat viable: charging them would result in a few casualties and perhaps a 6+ FNP enemy ... but then again, they could probably hold on until reinforcements arrived.  For the rewards, I like the mutating warp blade -- it does create chaos spawn which is very exciting (well, to me at least!).

Here's a few thoughts about builds.

2 Flamers of Tzeentch, 1 Pyrocaster (74 points)
Place them behind a quad gun equipped structure (defence line, or perhaps a bastion) and use the pyrocaster to shoot things out of the air.  Feel free to leave the position and swoop on a nearby enemy.  Or let them charge you and hope you don't give them a big FNP bonus.

9 Flamers of Tzeentch including 1 Pyrocaster with a mutating warp blade (222 points)
Nine is Tzeentch's sacred number -- so its fluffy.  And the mutating warp blade is neat!  The rest of the unit are there to deliver the bearer in to combat and in general be a road bump.  Just hope that you don't give too many units FNP -- hopefully with so many flamer templates going off most opposition (wisely) targeted would perish.
Posted by jabberjabber at 15:41

I have had some success with flamers recently. I have found that the best use for them is simply to keep them to a minimum unit of 3. Deepstrike a minimum unit of horrors with a instrument and standard. horrors allow auto deployment of flamers then. place horrors fairly close to enemy but not too close then use the icon to cleverly get flamers in nice and close. roast the unit. any stragglers can be blasted by horrors. totals less than 200 points and it can be a very nasty shock when it appears in the enemy deployment zone.

Just making sure you know the rule right, warpflame causes any unit that took a wound from it to take a toughness test. Passing improves their FNP by 1, or gives them a 6+ FNP. Failing causes d3 unsavable auto-wounds.

Nice site! I play CD primary, CSM secondary myself, so I'll be hanging around here quite a bit.

Welcome SnaleKing -- thanks for all your recent comments! Hope you continue to enjoy the site :)