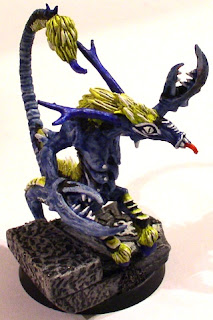 The fiends of Slaanesh have also taken a hit compared to the previous codex.  They have 3 wounds each, sure, but they are still only toughness 4.  That means they're going down like space marines with a worse saving throw.  And they're also vulnerable to instant death if they don't make their saving throws: think vindicators wiping out an entire unit.

They are now also missing grenades. This is significant.  Their loss means the fiends are a lot less playable than before.

What they do have is the ability to cause a successfully charged unit to lose 5I.  With their own I6, this means that they will go first against anything in the game -- they just have to pull off a successful charge.  Therefore, there is a role for fiends in an alpha-strike sense.

Their ability to reduce Ld of enemy psykers is an interesting one.  But its not too significant.  Overall, I think the fiends are now over priced compared to some other units in the game.  The main thing I can see using them for is shock commander killers.  As such, I'd be tempted to take them in units slightly bigger than the default if I'm going to use them.  Get them on the board.  Tactically get in to position (and/or screen other and support units along the way) and aim to wipe out an enemy command structure.  There's probably better ways of doing it though, but they're still kinda viable in this role.
Posted by jabberjabber at 16:03

The -5I might be a little better than that. Since anything has an I equal to or less than 5 will actually lose their initiative value altogether. Since there is no I=0 step the unit loses their attacks for that assault phase. This allows the fiends two rounds of attacks without taking any attacks back. But I agree that their frailty and lack of weapon skill and strength is significant and makes those attacks far less devastating.

Latest breaking news: today's FAQ of the main rulebook prevents I=0. So the Fiends will get to swing once before they start taking wounds.

They can work really well under certain circumstances, but we don't know what those are yet.

*shrug* and that circumstance may not exist.