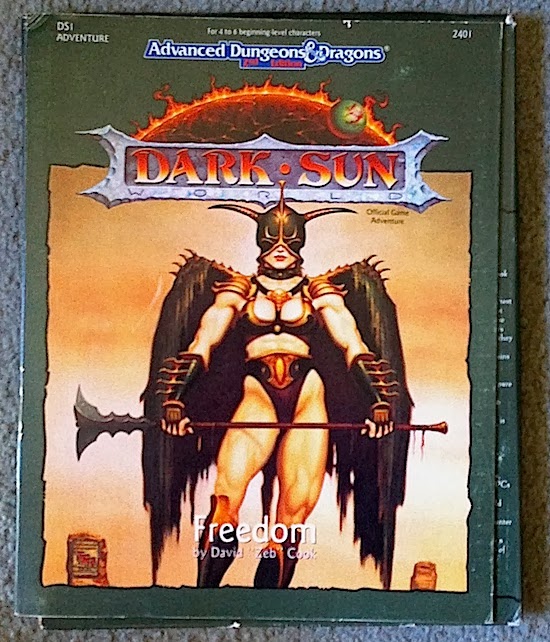 Continuing with the reviews of the ADnD Dark Sun Campaign Setting, today I wanted to take a look at the first published adventure to take place on Athas. Entitled "Freedom", this adventure marked a new design of publication. Inside the folder (as pictured) are two spiral bound books, one for the DM and one for the PCs. Broadly, the one for the PCs contains pictures showing certain situations to give the players an overview of the situation, or a close up of a certain item, etc. The DM's book contains the actual adventure itself. Summary stats and info are contained on the inside leaf.

As a product, I don't know of any owner being able to keep the folder of the spiral books in anything like mint condition. I've even seen shrink wrapped copies of these designs with damage from the spiral books contained within - its a very probably design flaw.

The adventure itself starts with one of several encounters that culminates in the same final result: the PCs are turned in to slaves. Singularly, this event is enough to shut down the entire game for some players and is a real source of friction. The best way I've found to get around it is to have a "powerful" NPC approach the PCs and ask them to have themselves arrested and turned in to slaves for different nefarious purposes.  This creates a sense of purpose in the playing group as they feel its a choice they've made, rather than something that has randomly happened to them. It makes for a much better atmosphere without losing any of the subsequent adventure.

In the next few sections, the PCs labour away on Sorcerer-King's Kalak's giant ziggurat - a building that he wants erected with all haste and doesn't care particularly about how many slaves perish in its construction. Various encounters can occur and they all have subsequent consequences. Eventually whatever choices are made, the culmination is the assassination attempt on Kalak by the heroes of the Dark Sun novels during which the PCs attempt to escape the death trap that Kalak has set. To be clear, the PCs are not the heroes of the assassination of the sorcerer-King, they play a secondary role to what happens in the novels and this will be disappointing to some players.

My main problem with the latter parts of the adventure is the fact that all the PCs may have split up and appeared in distinct sections of the final gladiatorial arena by that stage. Again, the fact that I had the PCs elect to enter the slave pens for a different reason was the only thing that was holding them together at that stage. Different groups would have no reason to work with each other by then and will be looking out for themselves if they are roleplaying the scenarios correctly.

To my mind, the adventure provides an excellent introduction to the brutal world of Dark Sun, but the events and choices made are highly individualistic.  There needs to be more in-game roleplaying reasons for a group to forge and stick together, and this is what lets down the adventure overall. If running Freedom, I would strongly recommend using such reasons and make becoming slaves in to a choice. The same brutal introduction to the game ensues, but becomes a much more enjoyable group effort. Two stars out of five from me for this otherwise.
Posted by jabberjabber at 20:26

If only all the inside art was Brom also but that would have probably been to expensive.

I also seem to recall issues of keeping the group together and character motivation from the adventure but have not looked at it in any indepth way in at least 15 years.

Pity about the artwork: it is certainly much more cartoonish than it needs to be in my opinion!