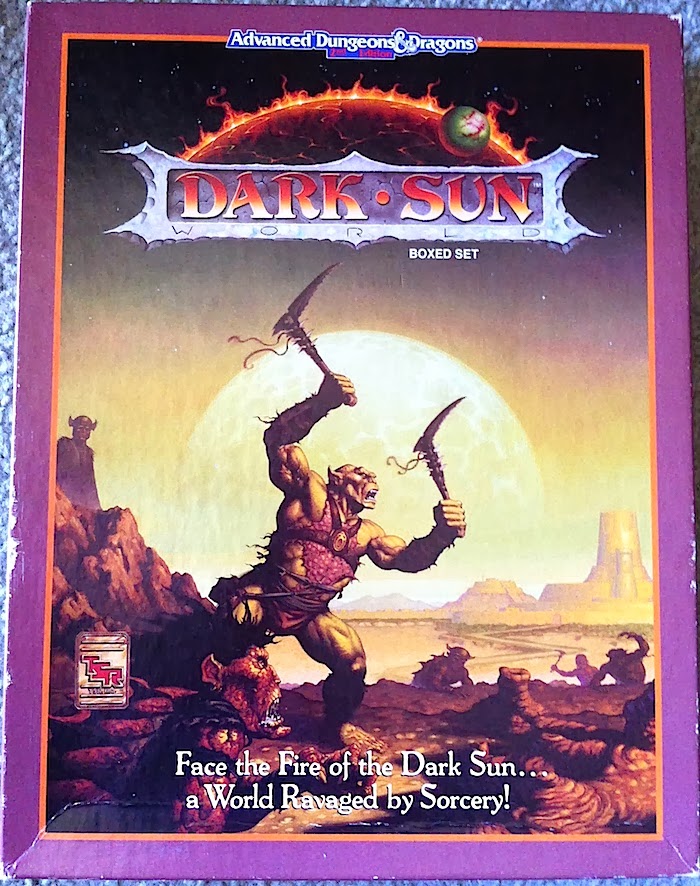 In Dungeons and Dragons there are a number of settings and campaign worlds that stand out against the normal fantasy fare. The Dark Sun campaign setting (first edition, 1991, pictured and reviewed here) is chief amongst them to my mind. Having DM'ed Dark Sun for many years during university days, it remains one of my firm favourites of all time.

So, what is all the fuss about? Imagine a world that is almost endless desert. Throw in to the mix that unscrupulous mages caused this state of affairs - all magic has to be powered from somewhere on this plane and the most frequent way is for the mage to drain the lifeforce of the surrounding flora - and this world is a post-apocalyptic one where survival is the keystone to many adventures.

There are a significant number of further twists that serve to define and differentiate the setting utterly from others. Firstly, every character from the greatest merchant to the lowest street thief has some wild psionic / psychic talent. Some may hone their psionic skills to a high precision, but every person on the planet has raw potential and is able to channel some kind of ability (limited telepathy, biological modification, teleportation, clairvoyance, and so forth). Where the life draining effect of magic is shunned (and indeed: persecuted), psionic ability has become the norm. There are no gods either (or if there used to be in previous ages, they have long since abandoned the plane of Athas - the Dark Sun world). Hence priests worship the elements (earth, air, fire, water) and occasionally the para-elements.

The world itself lacks metal (and metal ore) - in large part (presumably) because they were used up in previous eras. Therefore weapons and armours are created out of bone, obsidian, leather, teeth and all manner of other assorted items. Speaking of armour: you're not wearing much because its too hot and you're losing too much water to perspiration. And speaking of water: where are you getting yours from? It costs quite a bit if you're outside the protection of some of the more generous city-states.

And civilization, such that exists on the world, is perilous enough. Each of the major city-states is ruled with an iron fist by a supreme-power wielding Sorcerer-King (or Queen), who gained their power in a previous age and have long since cemented their positions by fair means (an election for instance ... but the populous didn't know just how long they'd live) or foul. In truth, these paragons of magic and psionics are the closest things to gods on this planet and can grant their law enforcement officers (templars) clerical power. Darker yet, each one of them is on the path to metamorphose in to a dragon - the ultimate predator who wields magical destruction like its going out of fashion. And yes: there is one dragon left in the world. And he's utterly evil.  But that's only because he's guarding the hyper-evil of the planet: an ancient being who starting a cleansing war to rid the world of none-humans.

The PCs also have access to a wider array of races, including muls (half human, half dwarf), thri-kreen (praying mantis insectoids), half-giants. But more than that, each race gets its own twist. Elves are not mystic creatures inhabiting enchanted forests: they're lanky desert runners synonymous with thievery; dwarfs are not bearded dudes with war hammers, they utterly hairless and have a psyco-magical need to focus on a medium to long term task all the time (or they get turned in to undead); halflings are cannibals and live in the wild regions of the remaining forests ... and so forth. And on top of that, each city-state has its own peculiarities and similarities to ancient Earth cultures (Romano-Greek, Aztec, etc.).

Overall, the Dark Sun setting remains one of the most innovative (alongside Planescape) of the entire dungeons and dragons run. It certainly merits at least 4 out of 5 stars from me. The negative side of it are the complex (and varying) psionic rules that needed to be implemented (now cured in 4th edition perhaps?!), alongside the fact that after millenia of stagnation, one of the sorcerer-Kings died (that always upset me a little bit, but I can see why that had to happen in some ways, but it did lead to a series of pseudo-high fantasy publications after it in what should have remained a Mad Max dnd setting). I'll be having a look at some of the subsequent publications in future posts.

got this set as a gift - always loved the fluff but could never convince enough mates to try it out :/

We had several long running dark sun campaigns that went on. Main issue people had was the high stat levels that usually got it called the power gamer land.

Tristan: well worth playing with the right group of mates!

eriochrome: yeah, I hear you about the power-gaming. Dark Sun does have that reputation. But it need not be that way with the right group :)