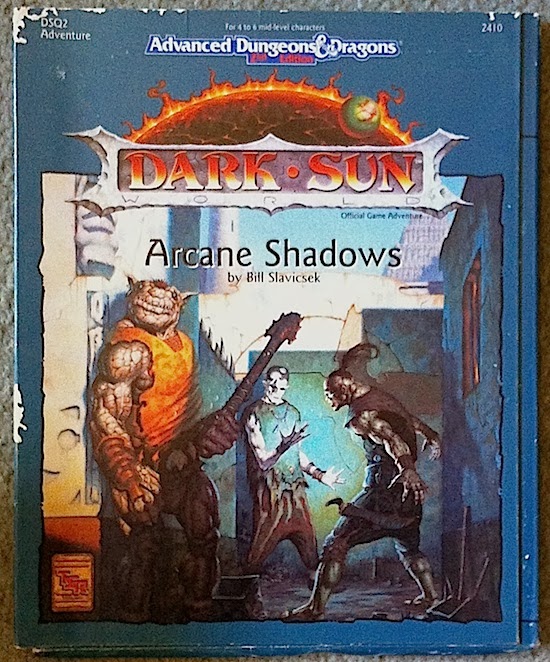 In brief, its a delivery / escort mission. I don't hold it in high regard and would only give it 2 out of 5 stars at most. Probably less on bad days!!!

Now for the more thorough appraisal.  Arcane Shadows is the third in the series of initial Dark Sun adventures that technically can follow on from Freedom and Road to Urik. There are two significant aspects that differentiate this adventure from the previous ones. Firstly a new author. And secondly: a complete departure from the plot line of the Prism Pentad book series that was released alongside the campaign setting.

Assuming that the players somehow survived the battles on the Road to Urik adventure, they have wound up in the City State of Urik in all probability. And that's about where things go awry for me.

By either being captured(*) or by ingratiating themselves with the Veiled Alliance (a secret underground group of preserver, or good, magic users that don't destroy the environment by casting spells), they come to witness a grand spell to turn a preserver, Korgunard, in to an Avangion (the high level, epic good equivalent of a dragon). The Urik templar who captured them (or he just bursts in otherwise) interrupts the transformation spell and following a strike from a magic weapon, Korgunard ultimately gets put in to a stasis-like coma to save his life. The Urik templar makes good on his escape and the remaining members of the Veiled Alliance want the PCs to transport the comatose Korgunard to a location near Tyr.

And therein is the next problem: why would the PCs be wanting to help? The Veiled Alliance is illegal and made up of those nasty spell casters (even if they're preservers) and they're putting themselves at extreme risk to transport Korgunard to his destination.

Putting that aside, the adventure then follows their trials as they make their way across the desert. Along the way, an ex-slave tribe known as The Free comes to aid them, there's the usual variety of fights to win - including another attempt to capture them by raiders(*) and other random encounters. The DM just better hope that they have a compass, because getting lost in the desert whilst hauling a comatose epic wizard isn't a great situation to be in overall.  The culmination of the mission requires the players to help Korgunard complete the spell, whilst fending off the original Templar from Urik and his minions (I hope the PCs didn't slay the templar earlier...).

Overall, I rate this adventure worse than Freedom. Sure, there are some nice points (introductions to the Veiled Alliance, and slave tribes in the desert) that could be expanded upon, but that's about it. The sheer lack of motivation for the players coupled with high danger levels make this one not so good - just my opinion.  To improve it, perhaps have someone like Malignor (from future adventures) take the place of the Urik templar and set him up to be an uber villain in the long term. Have one of the PCs possess existing links to the Veiled Alliance. Better encounters in the desert that build on the events of Road to Urik wouldn't hurt either - were there deserters that got away for instance? They could crop up here very snugly.  The lack of consequences and choice is also an issue: whatever happens, the ending seemingly can't be avoided (nor can other set pieces). There's even lines like if the PCs are not captured at point X, they can be captured here instead.  Whatever the GM/DM is going to do, it's probably going to take a fair bit of work to increase the interest and enjoyment level of this adventure from the way it is published if its run as part of a longer campaign.

(*) If you didn't give the PCs a reason to become slaves in Freedom, by now they're likely to be at their wits end by the number of times they've been captured and turned in to slaves.  This is a MAJOR problem with this series of adventures. Find another way at all costs DM's!!
Posted by jabberjabber at 20:12