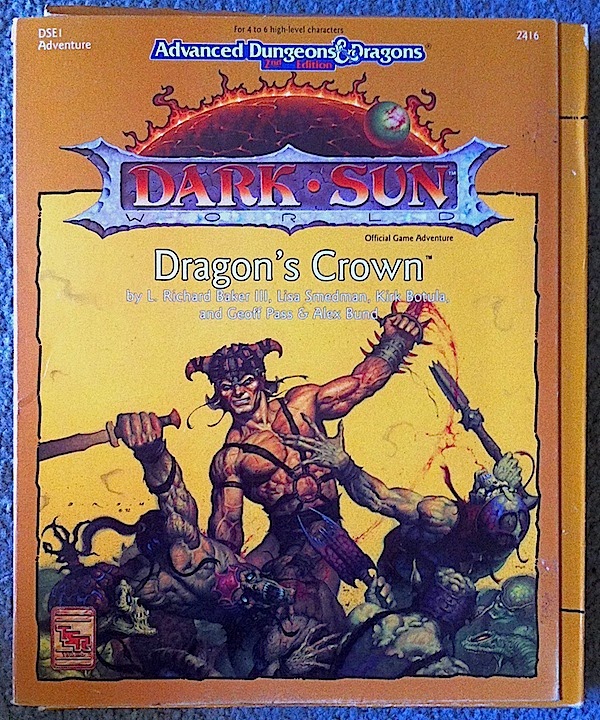 This is not a regular adventure - this is an epic. Its an entire campaign rolled in to one release. Its extent is grand: featuring treks across the entire known world and unexplored regions therein. It is the strongest departure from the story arc in the books that accompanied the release of the Dark Sun setting, and whilst technically the climax of the Freedom, Road to Urik, Arcane Shadows and Asticlian Gambit story arc, it most certainly can be played as a stand-alone adventure.

The major premise of the adventure is that The Order (who you've not heard of before, but if you had the prescience of running this adventure might have placed clues in the previous ones yourself) - the folks who are at the peak of psionic power on Athas - have decided that no one but them should wield psionic powers. Accordingly, they have created the psionatrix: a device that dampens psionic activity throughout the land making it tougher to use and limit the power levels of users in general.

Clearly, this does not go un-noticed. If they played Arcane Shadows, then Korgunard will contact them to investigate (why he can't do this himself being an uber spell caster and psionic master himself is dubious in extremis). They figure out that Hamanu, the Sorcerer-King of
Urik, could be behind it. But he isn't. And he says go to an old fortress and have a look there. So off to the Silt Sea and the Road of Fire to explore. Cutting a long story short, the PCs will eventually figure out what is going on (as well as being stalked by members of The Order, who are actually split by factional lines) and head to the Dragon's Crown mountains to attempt to destroy the psionatrix (which is where it is located).

On the plus side, the scope of this adventure is magnificent - no less than 7 playable "parts" which will require plenty of sessions to resolve fully. The possibility for role-play is very high (including driving Thri-Kreen crazy due to the psionatrix field) as well as interaction with characters from previous adventures. Thankfully Korgunard doesn't feature too heavily in the latter parts (immmm - he perishes! oops - spoilers!). And the whole "you're captured and turned in to slaves" meme is largely missing … except for encounters with Hamanu…

As with the other adventures within this arc, planning is essential to a full enjoyment of the adventure. Having little hooks in previous adventures and cues to characters within this one would be great. Also, the GM should feel free to ignore some of the more "you must end up here" kind of nudges - having the scope of an adventure this large is excellent and many tangents are possible and should be followed. But the GM must be prepared to go down these sidelines and not get narrow vision to plough through the plot no matter what.

Overall, this is very close to 5 stars, but given the railroading at various points and the turned-in-to-slaves meme repetition, I can only give it 4. Large scale action, high stakes outcomes, important NPCs doing things, and a GM ready and willing to give it a good whirl adds up to an excellent conclusion to the story arc begun in Freedom.
Posted by jabberjabber at 20:13

I like your reviews, I recently got Freedom and Road to Urik. Manage to get an incomplete copy of the Dark Sun Campaign Setting box (came with Slave Tribes in place of the Main Campaign Book), however I luckily got a fair copy of the Ivory Triangle with the missing book as an "extra". Trying to get my hands on the other adventures you have reviewed.

I'm Planning to convert them to 3.5, and I'm still wondering how to proceed with the "enslave the players Meme." This definitively is a very frustrating issue not only for the players, but also for the DM if it has to draw every hook using this method. Also with the players usually caring only for themselves, leaves the "Save us cuz You are the Heroes" hook quite flat.
I've found hard to look for motivations to give the Players some "fun time" in Athas.

Hi TheSalemDM - thanks for your comment - glad to hear you're enjoying this series!

For the "enslavement" meme, the best way I've found is to have the PCs volunteer for an assignment which sees them enter slavery. This might be for an organisation (Nobels, Veiled Alliance, Trading Consortia) trying to get intel, an object, meet a person, etc. But ultimately would lead to the Dragon's Crown adventure in some way. Indeed, this commonality of a shared mission is a neat way to bind the players to a common cause as well. On top of this, having one PC working for an opposition who is infiltrating said group of PCs adds to the drama (whilst keeping the group together nicely). This need not be overt either - the PC could be psionically programmed by post hypnotic suggestion to betray the other PCs at a certain time or confluence of events. And then the feel intense regret later and want to help rectify even more…! Hope that's helped somewhat?!