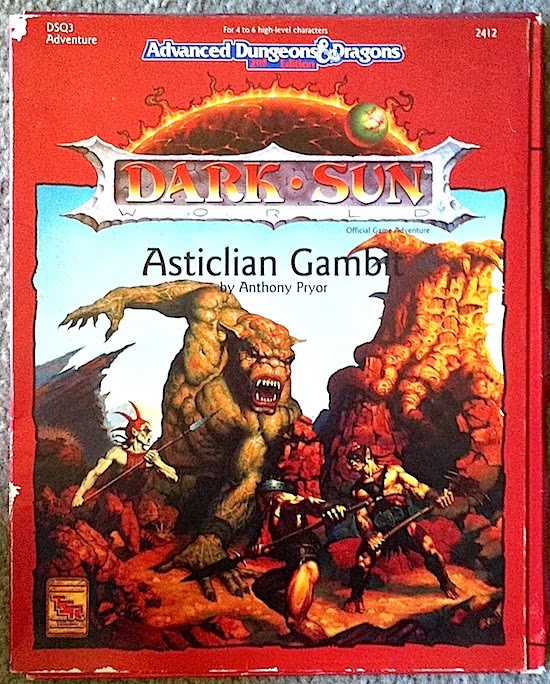 Assuming that the PCs finished Arcane Shadows, then this adventure picks up from that point. Beyond that, however, it goes downhill. Fundamentally, its a plotline without too much reasoning and lacking in the motivation department for the PCs.

Take the opening for example. If the PCs are in Tyr, then they're given an assignment to guard a trade caravan. If they're not, then they're in the open desert and witness an attack on a trade caravan. Being the good guys the PCs are assumed to either (a) happily take on the job with no questions asked; or (b) jump in to the melee they're witnessing without a thought for their own safety to protect the trade caravan that they've no vested interest in.  Hence, right from the start, this adventure lacks a certain amount of motivation. Regardless, the bunch of marauders attacks them for either guarding the caravan, or being bystanders. In every scenario, the head of the marauders will ALWAYS survive (sigh) as he will help them in the Hunt a little later (and is a member of the Asticles clan for which the adventure is tenuously named). After having a necklace given to them, they're tasked with taking it to the city-state of Gulg.

Sadly, it gets worse. After entering Gulg, the PCs will be made in to slaves / prisoners / lackeys by any one of a miasma of means.  I refer the honourable reader to my previous statements about why this shouldn't happen. This results in the PCs being stripped of their kits and forced in to the Red Moon Hunt. The clue is in the name really: there's a Hunt happening. And the PCs are on the wrong end of it. So off they run with a little head start to get away from their hunters.

A short time later, they bump in to some templars of Nibenay. And of course, they take them back to the city-state they serve. In chains preferably, because the PCs just love being captured / enslaved / etc so much in this chain of adventures. Its a running theme.

Nibenay himself tasks them with getting the necklace back and destroying it. So off the PCs teleport back to Gulg's dungeons to do just what was asked / post hypnotically suggested / magicked they should do.  They succeed, and witness a show down between the sorcerer-monarchs of Gulg and Nibenay before Nibenay teleports them out.  The two endings are broadly: (i) the PCs annoy both sorcerer-monarchs; or (ii) the PCs only annoy Gulg's and make a sort-of kind-of abusive ally of Nibenay.

One star out of five.  I've ran it a few times, but only as a heavily modified script.  I could not bring myself to run "as is" to be honest.

That does not seem familiar at all. I just do not think I have this one. Guess it is really nothing to miss.

I was wrong. I was digging through my storage boxes today and came across the dark sun box. I had this plus the other you reviewed with the addition of Black Flames and Dragon Crown.

The ones I was missing were Merchant House of Amketch, Marauders of Nibeney, and Forest Maker.

Cool! I've just put up Dragon's Crown. I have the ones that you're missing and will review them in due course (stay tuned! XD).

Hey, can we know which modifications did you apply to the adventure?

Hey -- Basically, I no longer run it in its original form - ever. I take elements from it as needed such as the Red Moon Hunt happening in the background, or the dungeons as a location, or even the necklace as a treasure item.
I also use the post-hypnotic suggestion on one NPC to have them act as an agent of another power once in a while. I tell the PC in advance that they will be roleplaying this. The others in the group don't notice at first, but something usually comes up that makes them question the other PC's action -- that usually leads to quality roleplaying if nothing else.