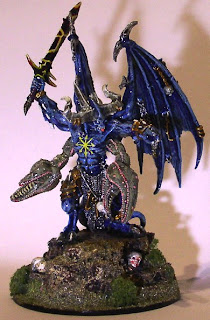 I admit it: I bought the Be'Lakor dataslate when it became available. Well, it was actually a holiday season gift from my wife (I have the best wife!).

At a basic level, Be'Lakor is a new HQ choice for either chaos daemons or for chaos space marines. He is a pricey unit - to be clear - but probably correctly (i.e. fairly) priced. Hence there is no "discount" for taking him.  But his abilities are a force to be reckoned with - he is a real "force multiplier" in a number of ways. And: he DOES have eternal warrior which is a great bonus to have in there.

Stat line wise, he is very similar to a regular daemon prince. His sword is pretty special, having both types of 'bane and strength modifier (and then some).  On top of this is his 4+ invulnerable save coupled with a Nurgle-like shrouding ability (which ties in to his whole "shadow" theme that he has going on). But he does not have any alignment to the big four chaos power in warhammer: he is the only undivided chaos daemon prince available.

To my mind though, the real benefit (and the reason to take him) are on the psychic side of things. He has access to all telepathy skills.  Why is this such a great thing? Well: think of being able to guarantee invisibility.  But it gets better: mental fortitude or hallucination can be extremely potent in their own rights if played right. Want more? Well, Be'Lakor gains bonus warp charges if enemies fail morale checks.  Hello terrify!  There's little not to like about such a combination in the game! Use Endurance on him if possible to help him keep alive and kicking should the flying shrouded jink'ed basic version be not to your liking.  And use puppet master (and the rest) to utterly disrupt your opponents battle plans. Especially those Tau that you're starting to really be annoyed with.

Play wise, I think I'd be seeing him as a chaos space marines HQ mostly. Even if I were fielding daemons, I would use Be'Lackor as an HQ of an allied chaos space marine force organization chart (so as to keep the warlord traits of someone better, like Fateweaver!). In such a mould, Be'Lakor brings a little extra pain to the table of the daemons flying circus style lists that are popular at the moment. And he doesn't remove too much either (possible a Tzeentch daemon prince, rather than a Slaanesh one, plus a few daemonettes).  Hence I can easily see him being taken with a minimal detachment of cultists to make it work.

In short: tailored to the right list, Be'Lakor will see competitive play and will be a pain to opponents in the hands of a competent player. And I think he will certainly see play in casual games too, for variation and shadowy themed armies (Night Lords? Alpha Legion?).
Posted by jabberjabber at 15:37