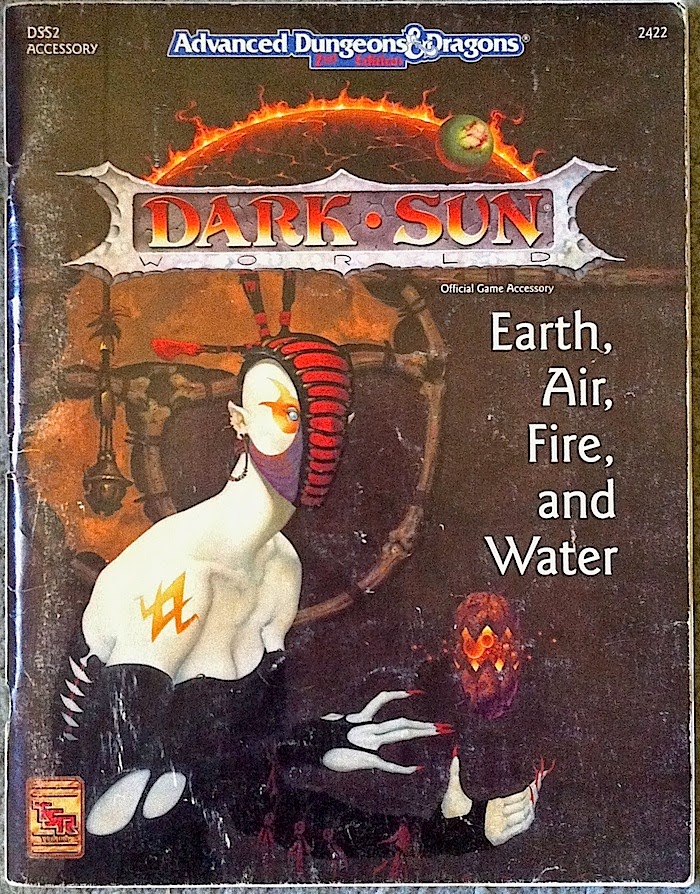 The original Dark Sun setting paints the roleplaying world of Athas as one without any divine beings (or if there were, they've abandoned Athas long ago). Instead, the cleric class attempt to advance the cause of one of the elemental planes: Earth, Air, Fire, and Water. To be fair, the campaign setting really made playing the cleric class a tougher challenge than most classes (perhaps even tougher than preservers) due to the combination of permitted equipment and spell restrictions. This publication radically alters all of this and transforms what might have been one of the weakest and hardest to play classes in to an absolute pleasure with an expansive background and many new thoughts and abilities.

The second and third chapters of the book is where things start to get interesting. The elemental powers simply want more of their element all around - but they also want quality as well as quantity. The principle problem is that Athas is a spent world. Hence although there is plenty of Earth element around, it is not of high quality: dusty sand where there should be fertile earth. Air is stagnant had super heated, rather than freely flowing and cooling. Fire hardly has anything left to consume. And water: well, the story is even worse there for the desert world of Athas. So the elemental clerics are seeking to improve this. Fire clerics actively want to build more cities and grow more forests -- so they can consume something of worth later on in a conflagration. Earth clerics teach crop rotations and attempt to improve the fertility of the earth. And similar for air and water. But, there are also paraelemental clerics: those whose planes overlap with two of Earth, Air, Fire and Water. Hence Magma clerics overlap Fire and Earth. Magma is joined by Sun, Silt, and Rain. Apart from the Rain clerics, these guys have it much easier. Their elements are in ascendency in both quantity and quality. Indeed, Sun clerics would like nothing more than to burn off the Air of Athas so that the rays from the Sun can hit the ground unimpeded. Silt would like to have everything on the surface of Athas turn to Silt. As would Magma. As such, Silt, Magma, and Sun are actively contributing to the further degeneration and desolation of Athas. Whereas the prime elements (Earth, Air, Fire and Water … and to a lesser extent, but perhaps unintended: Rain) are working toward a greener, cleaner more pristine Athas. The chapters here cover initiation in to the elements and their general powers. At a base level they're able to conjure forth small amounts of their element from the beginning. But to regain their powers, they also need to cast out some of their element. Hence Water clerics need to spread a skin of water on the ground to regain their spells. Therefore they actually need *more* water than the average Dark Sun PC … but are great in a group since they can conjure forth extra water when needed. No wonder they're a bit pressed and mentally unstable. Perhaps the most interesting mechanic is that once they reach epic levels (i.e. level 20), they can actually start becoming an elemental themselves.

There are a bunch of specialist classes (e.g., wanderer, city cleric) which are neat, but highly specialised in some cases. And almost as an after-thought, druids and templars get their own chapter, albeit very superficially. Another publication could have been made for each of these to be perfectly honest. Other ideas contained in the book include power conjunctions - which is when the cleric is surrounded by a a large quantity and quality of her/his element and has their powers enhanced. A bunch of new elemental cleric spells. And elemental shrines scattered throughout Athas.

Overall, this is almost a 5 out of 5 book for me to be honest! There are some negatives (such as inconsistencies versus canon) but they don't detract from what is a highly original presentation that is jam-packed with fresh ideas. I regard this book as one of the best of the Dark Sun series. And as can be seen from the image, my own copy has been heavily used over time. That said, if one is playing latter editions of Dungeons and Dragons, then this book is almost wholly superseded. But it remains as one of the shining lights of the Dark Sun series to me.
Posted by jabberjabber at 10:18