And finally we have the last space marine for the Raven Guard squad! 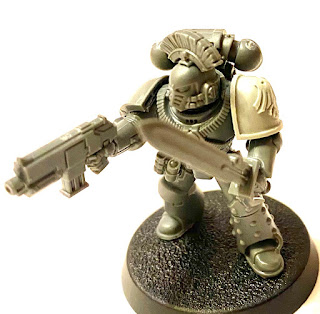 This particular marine is going to be the squad leader and he has been armed accordingly. Now, I really didn't want to go with a power fist here, and although I briefly contemplated a single claw for him, I eventually opted for a power sword. I wanted to depict a marine who has survived Istvaan 5, and is no longer the person who he used to be. Thrust in to an unwanted leadership position, the narrative behind him is that he picked up some armaments from the traitors as he pushed through their ranks, exacting bloody revenge for his former legion. I was a bit hesitant on the headdress for the marine, but what the heck. Maybe he was given it from a dying squad mate? At least, that's part of the narrative once again.
Posted by jabberjabber at 18:47