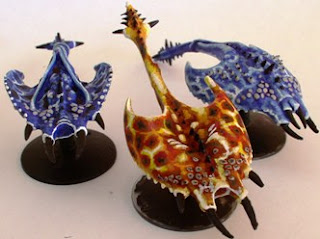 It had to happen: the screamers of Tzeentch foresaw the battering that they'd get by asking Kairos.  Instead of all their attacks being at AP2, they may now swap all available attacks for a singular AP2 attack in close combat.  But you know: that really isn't so bad.  Such an attack in a reasonably sized shoal of screamers will still cause headaches for terminators.

They are more readily shot down and generally dealt with by enemy armies as well now -- a S8 hit will kill them outright due instant death.  A bit more like what they were when daemons came our really (with armourbane).  Since I have been using them before they got good, this sits well with me.  But the real strength comes from the fly-overs that they can do.  Their slashing attack can cause certain armies quite a headache for little effort.  Combine with other flying units and the screamers will still, no doubt, have a strong place in daemon armies.

Fundamentally, they're still jetbikes as well.  Two wound jetbikes as well.  And they're a reasonable price.  Expect to see them execute late game swoops on to objectives to contest them (or claim them if playing that mission!).  I'd be tempted to field them in squads of about 5 or so -- enough to prevent them all dropping dead in one turn (unless they get really concentrated and sustained incoming firepower - in which case they've probably soaked enough wounds to allow other army elements to move in to place) and significant to cause headaches where required.