Chaos furies have been in the daemons pantheon for a long while. Even back in the old realms of chaos, there were independent daemons who owed no allegiance to the big powers. In the new daemons codex, the furies can be bought unaligned, or bought corrupted by one of the big four. The option to upgrade with to a daemon of the big four is what makes them really shine in my opinion:  shrouded Nurglesque furies; red Khornate furies with hatred; rending Slaaneshi furies -- there's little not to like. Perhaps Tzeentch is the only one that is not so wonderful since they are not spellcasters, but re-rolling a save of a 1 is just about okay. So themed armies only for Tzeentch furies.

The final point is their cost. They are cheap. Darn cheap. The fast attack choices in daemons armies has gone from "yeah Screamers of Tzeentch of flesh hounds are okay" to "what to choose ... hmmmm...". And that can only be a good thing. I could see the potential for fury hordes here -- in the same way that Tyranids can field gargoyle hordes.

14 Chaos Furies, Daemons of Nurgle (117 points)
More expensive than the above, but they get shrouded, at the expense of slow and purposeful.

16 Chaos Furies, Daemons of Khorne (133 points)
Slaughter and skulls for the skull throne!  The boost from Khorne is powerful: might as well take a reasonable sized unit to take advantage of that fact (and 16 is a multiple of Khorne's sacred number).

18 Chaos Furies, Daemons of Slaanesh (149 points)
Go and rend things!  Move with fleet otherwise.  A fast and quite hard hitting unit thanks to rending.  They could be a real danger.  And you can do everything that basic furies can as well.  Very worth while for this unit I think -- lots of potential! 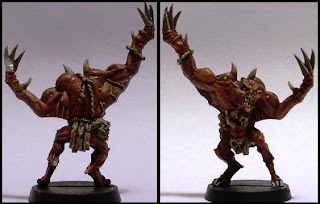 (Image: WFB Strigoi collectors miniature -- I know its not a fury, but I think it looks like a good approximation to one and I think a unit of these as furies would look very cool).
Posted by jabberjabber at 14:00

I ran a Tzeentch unit of 18 in a game about a month ago. Furies are nice as a cheap screen, to protect fragile units like horrors. I was playing against Ravenwing, and tried to use them to lock Black Knights in place. Then we saw they're only Ld 2. With Daemonic Instability, they're not an effective tarpit.

With 8 remaining, I lost 7 in a round, and Instability was about to cause me to give up first blood. Double ones, and those 7 get back up. My plan had been to charge a Daemon Prince in to deal with the Knights, but that meant getting challenge-locked for a turn while the Knights forced an Instability test on my Prince. Fortunately, the Prince made the Ld test at -5, but that approach to tackling the BKs was definitely a mistake.

I think there is no bailing out Furies. They're there to take bullets, eat a charge, and immediately die. Eating an Overwatch with your assualt unit is probably better than taking that big of an Instability check. 20 is probably too many for them, unless you have Fearless allies.