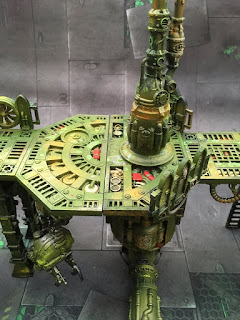 When the news broke about the new Necromunda underhive scenery being available, I was fairly excited. The new scenery pieces are amazing, and much less expensive (at least in principle) compared to the older resin pieces produced by Forge World that have been discontinued of late.

What I did not quite expect was a full-on update to the Zone Mortalis rules set to be released for the Horus Heresy at the same time! The new rules can be found via the Warhammer community website.

Fundamentally, the new rules are not that much different to what has gone before. There's an attacker, a defender, a couple of missions, and some special rules.

As per usual, the tight confines of the Zone mean that a player cannot select a monstrous creature, or dedicated transports. Base size limits are in effect too: no bigger than 60mm, and certainly nothing bigger than walkers.

Terrain plays a big part still in the Zone. The rules for bulk heads are still there, along with platforms and stairs. Given the new stair wells in the plastic Necromunda kits, these rules will be cited a lot in play I believe.

I like the retention of the special firing rules, as well as the "catastrophic damage" table which is nice to see. The rules for poisoned air, or void fighting remain pretty much the same, and void enhanced armour is recommended to avoid the effects of extra rending rolls being imposed.

Overall, I like the update. What I feel is missing is some of the more in-depth rules for various types of scenery. It might have been good to see some rules supplied for the Horus Heresy for the sector mechanicus servo-haulers for instance (the entire boxed set could readily be adapted for the Horus Heresy, I contend), along with specific conversion rules for the rest of the sector mechanicus boxed set (some of which is pictured here). Other than that - its all good!