It turns out that there is more than just me worldwide that wanted to have a titan in the Perennia colours. I was stoked that others reached out to me in the past year to discuss Legio Perennia (you know who you are) and I was only too happy to chat about that titan legion and what its iconography might be.

Now, when one invents a legion, there is complete freedom to choose whatever you like for iconography or colour. But the situation is slightly different here. Legio Perennia is a canon legion, but there is very little to go on for the Legio, except for the mention in the Horus Heresy short story that involves the Alpha Legion (which was also me reason for selecting Perennia).

Candidly, there really is only the name of the Legio.

As mentioned a long time ago when I was choosing the painting scheme, I felt that Perennia comes from the same root as "perennial", as per the plant type. This fact in itself is why I chose green for the major part of the colour scheme that I adopted for the war hound. To me, it also has overtures of something eternal, and even slightly Celtic perhaps.

Hence when I sat down to think about the logo, I wanted to try for something that brought these themes together.

The best result I had was looking at the ancient Celtic Tree of Life logo (also: Yggdrasil). If you google for "celtic tree of life", you will see the kind of thing I am talking about. The added benefit of this kind of symbology is that it is old enough to be out of copyright. Despite this benefit, the knots and swirls are very tough to paint due to the sheer level of complexity (I attempted several). So I started to look for a lower complexity version. There were not many. This Amazon seller for instance -- https://www.amazon.com/Celtic-Yggdrasil-Sticker-Mythology-Knotwork/dp/B01BO14HEI -- has bumper stickers that look great, and almost what I was after. In start white, it would stand out excellently against the green paint job of the body of the titan. Yet, it still lacks a certain something to my mind. Plus: needed to be simpler - much simpler. A design of this complexity is exceptionally tough to reproduce without very specific templating.

I therefore retained the idea of knots, but simplified it a lot. I ended up with this design that I painted on the side of my war hound. 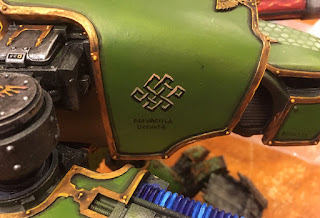 I am broadly happy with this as it is simple enough to duplicated, yet specific enough to be easily sighted and recognised. Let the annals show that this knotwork is now the logo and symbol of Legio Perennia!
Posted by jabberjabber at 20:36

Great job, you should tap someone up in graphic design and get a decal sheet of designs put together for the rest of your Maniple... when it grows :)

Already done for the main design ;)