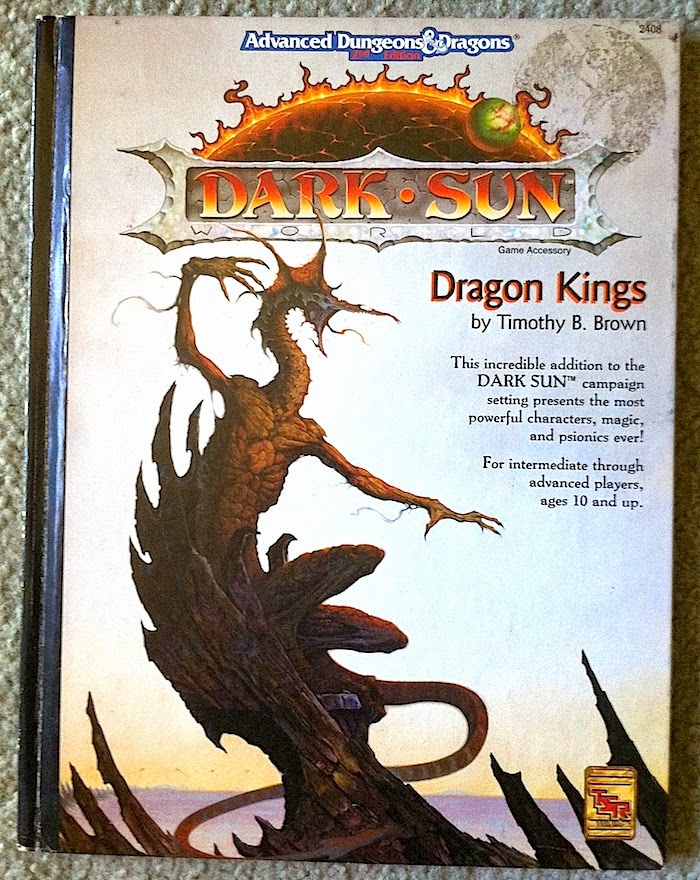 This is a hardback book unlike many of the expansions to the Campaign Setting of its ilk. Why this is the case is obvious enough from the front: it provides the playing group with the rules to expand all characters and classes to level 30. Why is this in any way exceptional? I think there are two core reasons.

The first reason is that the authors of Dark Sun wanted something fundamentally different from other campaign world. As they put it, a mage might ascend from level 20 to 30 in the Forgotten Realms with relatively little fanfare or notice. But on Athas, PCs cannot escape the fame (or infamy) that comes with great experience and background associated with achieving such lofty heights. As they cross the threshold from level 20 upward, they become the prime movers and shakers of the world they inhabit. Not for them the anonymous trips to some desolate ruins to delve for archeological treasure. Nope: that kind of stuff is for lesser levels.

The second reason is somewhat tied to the first and was made explicit in the Prism Pentad series of books. Namely that many classes can undergo radical transformations as the go up in levels beyond 20th. For example, defilers can combine their dark arcane arts with psionics to metamorphose in to Dragons (see image, below). In the books, this is demonstrated by the Sorcerer-King Kalak attempting to jump directly from level 20 or level 21 directly to level 30 (full dragon) in one epic leap by consuming the life force of the entire city of Tyr. And of course, the Dragon himself, Borys, went mad during this self-same process.

There is, of course a Preserver mage equivalent to this. That is the transformation in to an avangion. The Avangion is nowhere near as cool as the dragon, as it kind of looks like a far too delicate butterfly ultimately (see image, below) - rather than an ultimate fusion of psychic might and good magic -- why not just a good dragon instead, I'll never understand! Again, this type of transformation has been there since the beginning, as evidenced in Arcane Shadows.

So that covers the mage classes, but what about the others?

Dragon Kings details that Warrior classes ultimately achieve a different type of fame. They start to gather followers around them. And then whole armies. As their success in combat (and indeed: staying alive against the brutal world) becomes legend, more people seek them out to enter their service in hopes of bettering themselves. This ties in very nicely with some of the ideas present in Road to Urik. But one of my big gripes in this part of the book is with the war machines that are introduced -- the book makes explicit reference to the BATTLESYSTEM rules -- what the? Who owns these? Seriously, this crept up out of nowhere! I mean, I know such a thing existed, but the chances of Dark Sun players and GMs owning these rules is slim. Hence for big epic battles, one probably wants to think seriously about how and importantly: IF they should take place!

Clerics undergo a transformation as well. They eventually become their element. At first, this may only be a small portion of their body - perhaps a hand or a big toe suddenly turns to water at will. But once they hit level 30, boom, they can become a full elemental associated with their chosen element.

Druids are handled differently to this, and instead, become one with the land that they are sword to protect, eventually (perhaps) dissolving in to the land itself.

Rogues get a raw deal to be fair. They gain the ability to cast illusion spells (not very impressive), but also to improve their dexterity score to exceptionally high levels (could be useful!) as well as some other inherent talents (detect magic - yawn).

Psionicists progress pretty normally from 20th to 30th level. But, instead of having some mind-boggling transformation, or getting boring advancement, instead, they become "noticed" by The Order. The Order has cropped up in adventures before, such as Dragon's Crown, wherein they play the antagonists. It eventually becomes a case of join The Order or perish. Although this fits in with the motif of not going unnoticed when going up to level 30, it is also annoying!

Speaking of annoying, roleplaying a higher level dragon is impossible. The book recommends that once level 25 or so is reached, the dragon becomes pretty insane and needs to be treated as an NPC due to the pain of the transformation. This is curious as I question how they're able to go up to level 30 if they're already pretty insane by half way through -- especially given the demands of the higher level spells.

Finally, the appendices give new psionic abilities as well as spells. One of the main selling points of the book is to cast "10th level spells" as mages (and equivalent priest spells). Given that "Wish" is already a ninth level spell, it kind of makes you wonder what can be achieved with 10th level psionic enchantments! Some of the spells are nice: erecting a mountain fortress (yep: its a 10th level actual psionic enchantment) means you are changing the shape of the world and building your very own fortified structure to camp out in. Sure, "Wish" could also do this (technically).  What about creating a huge amount of vegetation, say: an entirely new jungle. Yep: a tenth level spell can also do that. On Athas, the desert planet. So what role does "Wish" and "Limited Wish" have in such a game? In my opinion they could have just been removed from the game. But then, there's also the argument that Wish spells are unreliable. Tenth level psionic enchantments do what you want them do with no obvious drawbacks!

Overall, this book is about 4 out of 5 stars from me. There are significant oddities contained within that almost made it 3 out of 5, but its a book that is nice to have (but not necessary). Perhaps its one for the GMs/DMs only, or the mildly curious players. Either way, the chances of making it to level 30 on Athas are rather small. 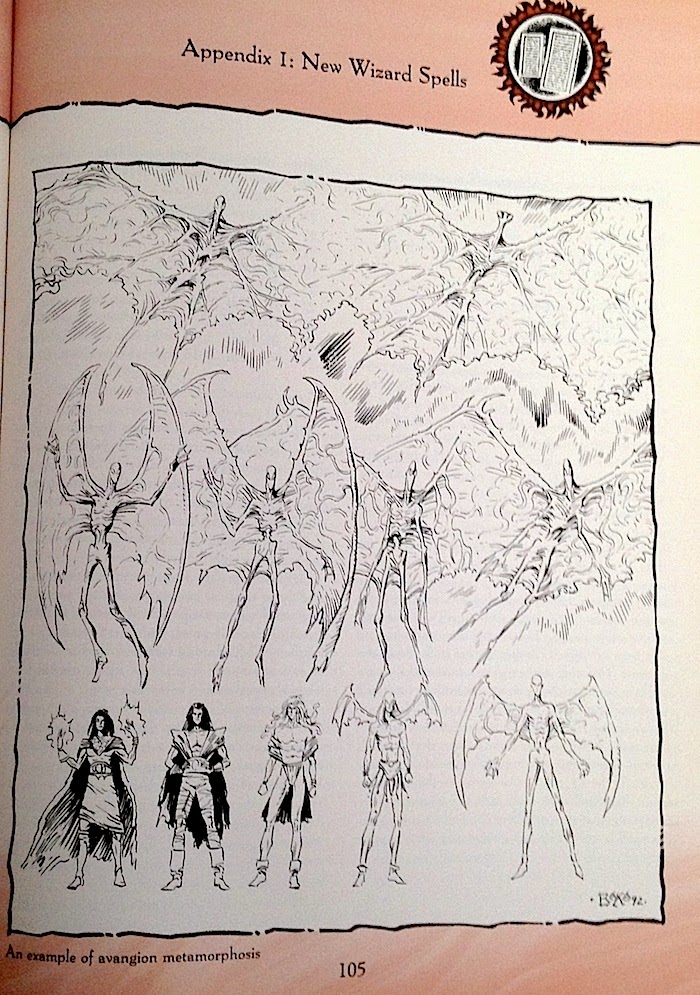 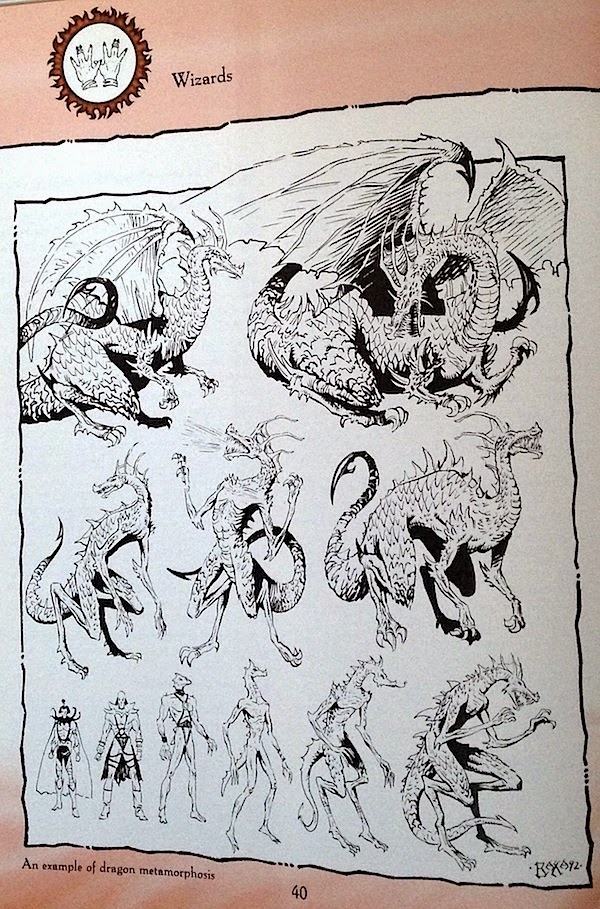