Not too far removed from Octavius, there is a remote M-class star, around which orbits a solitary Jovian type planet. In turn, a large natural Moon supporting its own atmosphere and biosphere orbits said Jovian. For millennia, little had disturbed the Moon. Little that is, until the arrival of a battered and stolen rogue trader's vessel. On board were chaos renegades, both astartes and humans fleeing from imperial space. It was on this Moon that their vessel set-down to carry out essential and critical repairs. And to evade both the chasing agents of the false emperor and the true owners of the vessel for a time.

Sadly for the unwitting renegades, they carried with them dormant ork spores: in the airlocks, under the soles of their shoes, and in a plethora of other nooks and crannies of the rogue trader's ship. They either had no time to follow standard biosecurity procedures or didn't know how to fully operate the vessel - no surprise given their lack of techpriests. The result was the same in either case. 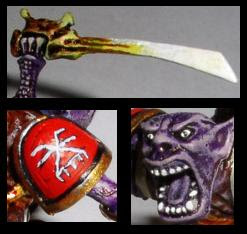 On the Moon, the renegades were forced to stay marooned for weeks as repairs progressed painfully slowly. The weeks developed in to months. And the vessel came no closer to getting fixed despite the beseeching of the pantheon of chaos. The renegades had truly lost track of the amount of time they'd been there when they sighted the first ork and took their first casualties.

Resources were redirected into defending the stricken vessel; their home. Scouting parties were sent out. Repairs were halted. But it wasn't enough. The time between each wave of greenskin raid was perhaps over a year to begin with. Then months. Then days. They didn't hold out long after that.

In control of the Moon, the orks set about the old vessel with a new waaaaaaa in mind. With a more intuitive feel for the vessel's systems, they made quicker progress to repairing it than the humies ever did. It was then that the Great Devourer came.

A tiny splinter fleet, possibly from Octavius, perhaps elsewhere hungered for the biomass of the Moon. A remarkable thing happened, though. The orks repulsed the invading species. But somewhere along the line, a new species was created. Part ork, part tyranid. New orks emerged from the flora. The older orks saw them for the unorky creatures that they were and set about exterminating them. But no new purebreed orks were being created. All their spores were turning into hybrids. The hybrids came to replace the old order of the orks. They took over the repairs of the vessel and succeeded. 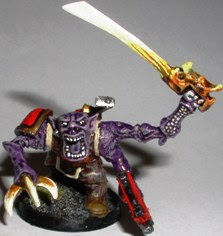 Aims and Model.
Rummaging around my bits box, I came across a very old plastic ork body and head. Originally, I had thought to create an ork-genestealer hybrid as I had also found an old space hulk plastic genestealer arm that had long since snapped off its original model. But I also found an old tyranid bone sword arm. Could I possibly use all of them in one model? You bet. Add in to the mix a chaos marine bolter (slugga?!), a khorne berzerker scabbard, a space marine shoulder pad, and I had all the parts for an interesting conversion!

Painting.
There was one rule here: the skin was to be something other than green! I chose purple in the end as it seemed fitting for a hybrid model. After undercoating in black, the basecoat was worm purple over the exposed ork and tyranid flesh areas. This was followed up with a purple ink and highlighting by mixing the purple with bleached bone in a number of layers.

The leather armour was coated in brown, inked brown / black, and highlighted with bleach bone. The bolter (slugga) was drybrushed in silver along with the shoulder pad and the scabbard on the ork's back. Red was applied on the lower portions of the scabbard, the bolter, and across the shoulder pad. However, when I painted this miniature it was a very warm day (some 30 deg C with high humidity) and the red didn't dry evenly on the shoulder pad. As it dried, it cracked over. At first I was very bothered by this. But then I thought: wouldn't the original renegade's equipment be remarkably damaged by this point in the narrative? More than likely. So, I left it as is and painted Khorne's symbol over the top of it. 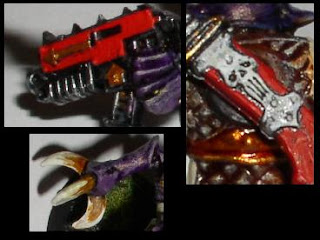 The bone sword was painted in sunburst yellow, progressing to white toward the tip. Brown and bleached bone was applied to the lower portions of the sword and a similar prescription was done with the genestealer claw arm. Several streaks of brown were carefully drawn upward on the bonesword to make it look old and well used. Final details (eyes, teeth) were completed in bleached bone and white.

Evaluation:
Positives: A most unusual miniature! I like how this has turned out on the whole; especially given how many different spare parts make up the creature and the various painting styles (genestealer, Khorne, ork) that were used.
Negatives: I got worried by the cracked red paint on the shoulder pad, but grew to like it. Further, I'm genuinely worried I might start a chaos-worshipping ork-hyrbid army now. Can I resist?
Posted by jabberjabber at 05:24

Naa just kidding, love the model and the fluff is good.

Looks good, it's not something you see on the tabletop often so it gets my vote for being cool.

Nice job on the conversion too, I think the purple was a good color to go with.

Hi Guys,
I've always figured that genestealers must be able to infect other species beyond humans, so I thought I might explore that concept with some random bits cobbled together from the old bits box. The purple colour certainly suggests genestealers to me. Yeah, a bit different and I'm sorely tempted to do more :)