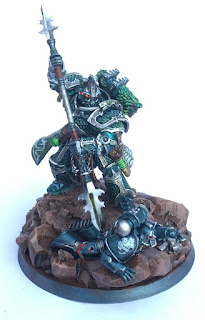 This will be a controversial post, and contain mere opinions backed up by little more than knee-jerk reactions in some parts. The topic: which space marine Chapters are plausibly successor chapters from the traitor legions?

The gem of a topic is one that I've been wanting to tackle on the blog for a little while now, and today is about as opportune a moment as I've had for a time. At the heart of the question is whether any loyalist element of traitor legions survived the Horus Heresy and still exist in more "modern" times in Warhammer 40,000.

I will start with some non-controversial statements. There are at least 2 main elements of traitor forces that are plausibly still around.

Grey Knights.
The first the the Grey Knights. It is not controversial in the slightest that the original nucleus of the Grey Knights contained traitor legion elements. Take for example, Revuel Arvida, former member of the Thousand Sons, who became Janus. It is probable that the likes of Night Lord, Fel Zharost, also became part of the original core of the Grey Knights. There is no controversy here, other than they are probably no longer living in 40k.
Black Shields.
Also of zero controversy at all is the existence of the Black Shields. These marines date from the Horus Heresy and contain elements of most legions who decided to forge different paths to their parent legions. Whether they are still around in 40k is another question entirely.

Let's turn to the more controversial chapters then.

World Eaters.
Almost the only chapter that I could scour that bears hints of lineage from the World Eaters are the Minotaurs Chapter. It is supposed that the original Minotaurs (the red and yellow heraldry ones) were formed from World Eaters. The later lineage would be from elsewhere (Iron Warriors), or be at least described as chimeric. There are descriptions of this 21st founding cursed chapter as being basically berserkers.  I'd give this a plausible rating overall.
Iron Warriors.
Carrying on from the above, the newer iteration of the Minotaurs chapter might plausibly contain some element of the Iron Warriors geneseed. Or be a hybrid with World Eaters. Regardless, the change in livery is suspect at best. I'd give this a plausible rating again.

Secondly, there are historic rumours that old timers like me heard that the Silver Skulls chapter were from the Iron Warriors. This is almost entirely based on their emblem. In Universe, the Silver Skulls are no longer thought to be of Iron Warriors descent -- they are Ultramarines, but there was a time when they might have been. This therefore gets a rating of nope.

Thousand Sons.
Who doesn't suspect that the Blood Ravens might be descended from the Thousand Sons? Knowledge is Power! This one has to get a rating of plausible simply from the sheer level of interest in the subject! Don't flame me.
Death Guard.
The Sons of Antaeus seem to be a great fit for a Death Guard descended chapter thanks to their sheer resilience. Officially they are Ultramarines, but they are also part of the cursed 21st founding. I'd give this rumour a rating of possible.
Night Lords.
The Carcharodons might or might not be descended from the Raven Guard. They might also have an element of Night Lords in them too. We're not sure on this one, but there are hints in the canon books that they might have at least some Night Lords descendants amongst their number, or are chimeric. This gets a plausible rating from me.
Emperor's Children.
The Red Scorpions have a focus on purity and pride in their livery that is very similar to the Emperor's Children legion. Whilst I'm unclear where this rumour came from, I don't think it is entirely true and thus this one only gets a rating of possible from me. On a bad day, I'd just say nope.

The Death Eagles have purposefully obscured their background and colours from Imperial records, and it might be with due reason. It might be the case that they are indeed descended from the traitors. I'd give this a rating of possible to plausible -- seems more likely than the Red Scorpions at least.

Sons of the Phoenix. Officially they are Imperial Fist successors. But that name. And the colour scheme. Plus the iconography. I mean. Seriously. Rating of nope due to the official word on the matter. Rating of plausible due to everything else. I hope Cawl created these ones behind Guilliman's back.

Sons of Horus / Luna Wolves, and Word Bearers.
I could not locate any loyalist successor rumour for these two traitor chapters. Let me know in the comments if you are aware of any.
Dark Angels.
Yes, I know the Dark Angels are not traitors to most. Sorry. But wait. What about the Fallen? I couldn't find any loyalist Fallen. But there's Cypher. So I include them here for sake of completeness only.
Alpha Legion.
Returning to my own favourites now, and again as a long timer in the hobby, there are two chapters that stand out to me. The first is the Sons of Orar. They have an Omega for their symbol and date back to the Heresy with an unclear background. Officially they are Ultramarines. So this gets a rating of nope from me sadly.

Then there are the Iron Snakes. I have no idea where this rumour started up to be honest with you (maybe similar modes of operation?), but I've heard it from multiple sources. However, the official canon is that the Iron Snakes are Ultramarine successors from the second founding. Hence this is also a nope rating.

Aren't the Alpha Legion loyal anyway? For the Emperor!

The Silver Skulls are Ultramarine successors, in homage to the Iron faceplate of Barabas Dantioch, former Warsmith of the Iron Warriors and a loyalist. Gulliman has a tremendous respect for him, and I believe he would forged them in his memory...it would be a small chance Gulliman would use his geneseed for the new chapter, but he might have done!

Thanks for the comment OJ!
I guess I'm showing my age a bit, but I remember thinking at the time that the homage to Dantioch was mentioned that it was as good a retcon as I'd seen in a long time ;)

I once had a Silver Skulls army and always thought of them as Iron Warriors successors.

Also yes, the Alpha Legion are indeed loyal and thus do not need to be included here. ;-p

Seriously doubt that there are any Word Bearers successors. They essentially had 45 years to winnow out anyone suspected of loyalty to the Emperor, either through sending them on suicide missions or actually killing them.

Blood Ravens are all but confirmed to be loyalist Thousand Sons, perhaps given the events detailed in Fury of Magnus they need to be put down as they have an unfortunate habit of going rogue en mass

Would love it if there were loyalist successors to the Luna Wolves, Night Lords, Death Guard and Iron Warriors but have had their origins scrubbed to remove the stigma of shame.