Background.
A captain of the Serrated Suns chapter of the Word Bearers and also one of the first of the Word Bearers to look into the depths of the Eye of Terror -- he discovered that it looked back at him. The daemon, Raum, possessed him (or arguably formed a symbiosis with him) and enabled him to transform into an incredible part daemon entity capable of mass destruction on the battlefield.
Purely aside from me, he was also best buddies with Kharn, and the two enjoyed a strong friendship until the end. At which point Kharn was rightly angry...
Strengths.
The stat line along for Argel Tal is very attractive with 5's all round apart from 4 wounds and an extra pip in WS. Combine this with a natural 2+ save and the daemon special rule means that this is an HQ choice to be reckoned with. His close combat attacks feature AP3 at S+1 which means he can pump out a huge amount of damage in melee. The rending and shred rules merely add to this deadliness level.
I find the warlord trait, Master of the Vakrah Jal, to be very interesting indeed. Using this, Argel Tal unlocks Gal Vorbak as troops choices. If the unit that Tal joins are made of models that have the daemon rule, then they all get feel no pain too. This can be really strong overall, and encourages a really interesting army composition.
Weaknesses.
He is not a scoring unit, nor does Tal have any ranged weaponry (except for the standard grenades). Naturally, he's also only available to the traitor faction.
Curiously, Tal lacks the Word Bearers Astartes special rule, but this is understandable. This does not affect his ability to be a praetor level character and select a rite of war from the Word Bearers list though.
Other than that, the player will need to consider how to get Tal where he needs to be.
Overall.
Argel Tal is a very strong close combat HQ choice for the Word Bearers legion. An army with lots of daemons in and Gal Vorbak is frankly frightening from a number of different angles. But that sort of army requires finesse to make work well.
Posted by jabberjabber at 10:33 No comments:

Background.
The Warhammer Community recently released the first in what promises to be an exciting series of publications on exemplary battles. Contained within this first release: The Battle of Pluto, is a new unit for the Horus Heresy game, the Huscarl Squad.
These Imperial Fists marines have risen through the Phalanx Warders and are considered to be very hardy and therefore charged with the shielding of Imperial Fists battle components. They are unsung heroes of the Imperial Fists and have a "singular nature" in the service of Dorn.
Strengths.
They are Cataphratii terminators that carry storm shields, along with a power weapon of their choosing. This automatically ranks them as high quality and a solid investment. The ability to upgrade with power gauntlets of the Solarite flavour is superb, and the grenade harness rounds them all off nicely.
In addition to this, the teleporter transponders mean that they match the Night Lords for the ability to get where they need to be. This is uncommon in the Horus Heresy and should not be overlooked.
Other special rules grant them bonus WS if they are charged and have 3 or more models remaining (this extends to characters joined to the squad) and they can replace a legion command squad as a retinue if required (certainly recommended for consideration from me!).
Weaknesses.
Fundamentally, these marines are still single wound terminators with a moderate leadership value. Models that are able to pump out enough shots to force saving throws, and those with AP2 or other means (e.g., Fear) are going to cause the squad problems. With this in mind, it is important to remember the price tag attached here which is moderately steep, but very reasonable for what you get. Its just a pity they don't have 2 wounds each really as otherwise they could compete with the Salamanders terminators.
Finally, without any ranged weapons, it is important that these marines get to where they need to be in the game as soon as possible. Teleport in by all means, but then watch out for faster armies who will run rings around them (White Scars).
Builds.
5 Huscarls, all with power axes. (275 points).
This is actually the baseline squad and it will serve very well as a teleport in and make a mess of a backline squad, or hold a critical line against the advancement of enemies -- just as Dorn intended.
10 Huscarls, 5 Solarite Power Gauntlets, 2 Power Axes, 3 Power Swords, 1 Grenade Harness (535 points).
Probably only for legendary battles where a Primarch is involved given the points costs here. Regardless, this squad really will hold a good line against most comers, particularly when paired up with the likes of Dorn himself. Good luck, and don't take and fear tests from Night Lords.
Posted by jabberjabber at 10:00 No comments:

The Battle of Pluto: Hydra’s Devastation

Fresh out of the Warhammer Community today is the first in what promises to be a high quality series of releases for the Horus Heresy: Exemplary Battles in the Age of Darkness. In this case, it is The Battle of Pluto: Hydra’s Devastation. This particular release centres around the battle of Hydra and is one of those very notable battles in the Heresy that hasn't received as much attention as it might otherwise deserve -- and hence the release.
Here, we get to grips with the Alpha Legion tearing into the outer solar system defences around Terra. Arranged against them are the forces of the Imperial Fists. These events are covered in the Black Library release Praetorian of Dorn. The release is a solid 12 pages long (10 not counting the covers) and gives us a new campaign to fight that consists of 3 individual battles, along with a new unit: the Huscurl Squad. All this set with a good amount of background material and lore that would make some of the earlier writers of the black book series proud, I would like to believe.
The so-called "legendary battles" themselves are entertaining. The first one (A Spear in the Void) represents the Alpha Legion making a surgical strike on Hydra with the Imperial Fists defending. The second (Maelstrom of Carnage) deals with the aftermath of the first game and is effectively a Zone Mortalis game. Whoever won the previous game is the attacker here and must push on into enemy territory to either damage things further, or to kill off the remaining forces (also depends on your point of view I guess!).
The final game is "Nucleus of Destruction" and represents the clash between Dorn and Alpharius at the culmination of the Battle for Hydra. The outcome is decided by who kills the opposing Primarch. All told, this is an interesting series of connected games that can feature in a connected campaign for the dominion of Hydra.
We will review the new Imperial Fists unit in a distinct post.
About the only thing that I can say I'm slightly down on is that fact that this publication might not end up in physical publication format. But that's life. And I'm very pleased to see the Horus Heresy line get some quality attention like this. It certainly bodes well for the future. Bring on the second edition of the game!
Posted by jabberjabber at 20:48 No comments:

Reaver Progress at the resolution of September 2021

A short update on the Reaver today. The picture below shows the rough state of play for the titan. Everything is dry-fitted together (and a big shout out to my daughter who helped with the dry fit and holding the weapon on to the carapace for the image; but ignore the shoulder pads being the wrong way around! Maybe this will start an unlikely trend? Maybe not...). 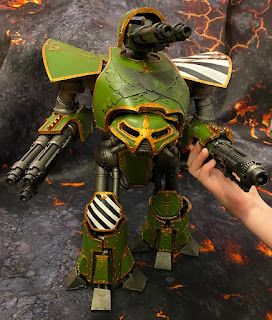 Regardless, significant progress has now been made with the painting of this beast. All the basics are in place and awaiting the first oily wash over before progressing to some detail and edge highlighting.

For the curious, the Warhound weapon on the top has one of the spare Warhound leg guards wrapped around the top, but I intend to make this fully exchangeable for the missile launcher. As for the rest of the titan, the legs guards, the knees, the weapons, and the shoulders all need to be glued into place yet. I will keep the torso unglued from the legs to ensure portability.

Much more work yet to be accomplished here, but good progress is being made! 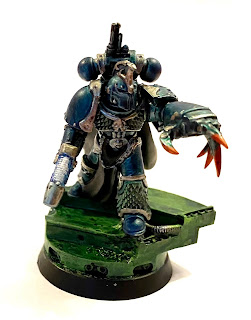 Clearly there is still work to be undertaken and completed on the miniature, but the painting scheme is really taking shape nicely at this point -- hence the update. Some shading is needed on the silver edging, eyes need to be done, and other fine details attended to. The subtle blues and greens of the miniature are all in place nicely and the claw is starting to look suitably wicked as well.
Posted by jabberjabber at 20:21 1 comment:

We interrupt the regular proceedings with Nurglings.

This batch of Nurglings have been causing gremlin like problems in the bits box and demanded to be assembled and at least base coated. Who am I to disobey Grandfather Nurgle? 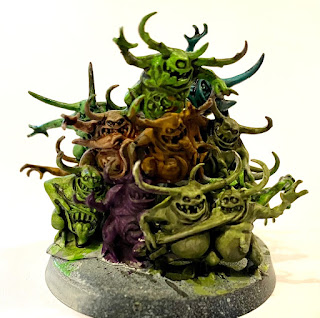 Clearly and self-evidently, this is a works in progress. With that said, I wanted to veer away from the usual approach of having everything in the same colour and try to give each and every one of these daemons their own unique feeling. Therefore, I have opted to use a different base colour for each and every one of them. It has been rather taxing to achieve this without spilling too much of the paint over on to adjacent Nurglings in the stack, but overall, not a bad first attempt at a base coat. Note in particular that some of the daemons have been picked out using contrast paints which has helped immensely with this approach and provided the necessary shading without really trying.

What is left to do is tidy up the details. Teeth, tongues, horns, mutations, infections, internal organs, pus, gore, and general grubbiness await.

Posted by jabberjabber at 19:20 No comments: