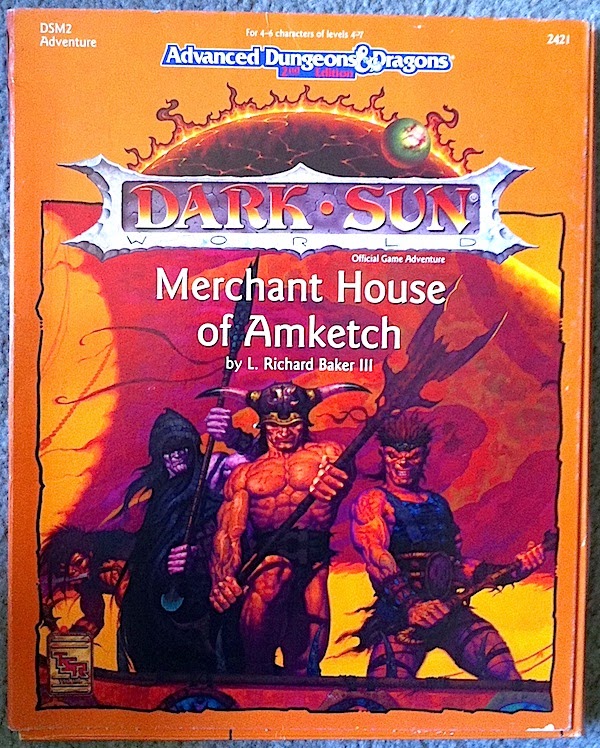 This is technically the follow-on adventure to Black Flames, but there is little overall meta-plot or character arcs to support this. The only real nature in which it is a follow on is that the PCs are going to have to be higher levels. But that is about my only complaint. Merchant House of Amketch is a shining light of an adventure for Dark Sun in my opinion - possibly better than Road to Urik or Dragon's Crown even.

The overall plot concerns the shaqat beetle: an insect that is able to inhibit psionic power. Naturally, orders like the Veiled Alliance want to know more about this. But the real power in the plot is the story telling. It involves the PCs without railroading them severely as other Dark Sun adventures are want to do. Instead, it starts out steadily with the Veiled Alliance (or others should you wish) asking the PCs to investigate the beetles. They know that Amketch is transporting heaps of them. This naturally leads to them being hired by the Amketch merchants for a little job: caravan guard duty. And then a little undercover work!

Aspects of the adventure can tie in really well with the Dune Trader supplement as the PCs figure out the life of a trader and the Merchant House. But investigating the beetles turns in to a much more interesting plot line when the caravan master is revealed to be a House Shom (a rival house) agent!  He also drugs the wine of loyal Amketch agents. Shocking! And so very Dark Sun.  Undoubtably the PCs won't do what the GM wants after that. But the adventure caters to that -- and in some respects encourages it as it likes the idea of the PCs trying to stage a rescue mission for anyone of their number who gets captured by this agent (etc.). This is so very refreshing compared to the BANG! you're all slaves meme problem in adventures like Arcane Shadows.

Eventually, the PCs will head to Balic (assuming they're still interested in the beetles -- which they should be because if they got in to the wild it'd be a serious issue!). Infiltrating House Shom (or by other means), they track the origin of the beetles to Kalidnay. There, a nefarious defiler is bonding regular beetles using ancient bio-tech to create the psionic damping variety. Will the PCs be able to stop the defiler driving the beetle trade? Will they release the beetles in to the wild (a threat that is actually made at one point)? Will they follow the adventure linearly or go their own way?

This adventure has everything for me: intrigue and adventure coupled with the potential to save the world from a great threat that has just been exposed. So its 5 out of 5 stars from me. Run this adventure as is unless you have a good reason to swap out a named NPC. Go with the PCs wherever they want to take it (most of which is anticipated by the adventure notes). Use random raids as desired to push the PCs back in the right direction. Even throw the desert at them. This adventure has it all, and the potential to be spun out in to an epic.